Some Thoughts on "W."

I've seen it, I've had a couple of days to mull it over, and now that I'm officially in the clear embargo-wise, I can officially say it - I really liked W. 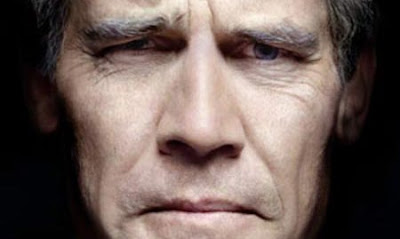 It has long been one of my most anticipated films of the fall, even when it was popular to trash it sight unseen, and while I would hesitate to say I loved it, I am going to see it again with a commercial audience later today, if that tells you anything.

The first half drags a bit, but it really gets cooking around the halfway mark when the cabinet meets to lay the groundwork for the invasion of Iraq. It's a killer scene - tense, eerie, and in retrospect, chilling. Richard Dreyfuss' Dick Cheney is appropriately menacing, and Stone directs the scene with a calm, clear eyed savagery that much of the rest of the film lacks. It does have a somewhat goofy tone, as evidenced by the often bouncy music that plays faintly in the background throughout the film, but the second half is more serious and has some moments of great power.

Josh Brolin is indeed as good as the buzz indicates, but for me the real standout was James Cromwell as George H.W. Bush. While his performance sounds and looks the least like his real world counterpart, it is the most well rounded and deeply felt, and most worthy of Oscar consideration. As the Bush patriarch that W spends his whole life trying to live up to, Cromwell lends a sense of world-weary wisdom that I never would have expected from someone with the last name Bush. The scene where Bush Sr. loses the '92 election to Bill Clinton is absolutely heartbreaking (and I'm a die hard liberal!).

I never would have thought it possible, but Oliver Stone really did make me feel for Bush, and to an even greater extent his father. W may not be the powerful, probing character study it could have been, but it's definitely a film worthy of more consideration than it has been given in some circles.

My biggest caveat with the film though is it's timing. Releasing the film mere months before Bush leaves office, leaves the film without a clear stopping point, and I think that waiting until next year would have given the film a clearer scope of his presidency. As it stands the ending is a bit abrupt and lacking definition.

On the whole though, there is plenty here to like. It is without a doubt a flawed film, but a fascinating one nonetheless.
Email Post

Daniel said…
Whew, me and you are the only ones on the positive of this one, Matt. I agree with all your thoughts, especially the mention of the key cabinet meeting scene as the turning point.
5:31 PM

Anonymous said…
Ugh, so good to hear positive thoughts on this, can’t wait to see it!
6:49 PM

Anonymous said…
I was not a fan of this film at all, (saw it Friday night) but I generally love Stone's political views (as I share them) and a number of his other films (PLATOON, JFK, BORN ON THE FOURTH OF JULY, SALVADOR, NIXON) I will write a review of it today.

I respect all of your opinions, however.
9:27 AM

Anonymous said…
However, I was surprised I liked THE SECRET LIFE OF BEES, so there was a bit of asilver lining for me this weekend.
9:29 AM