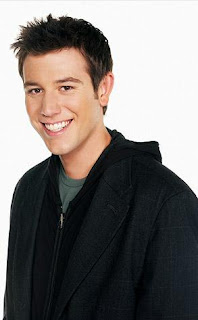 OK...so I'm reading Criticwatch's latest Ben Lyons Quote of the Week, and I swear everytime I read a new blurb from this guy my soul dies a little inside.

Here's what he had to say about Max Payne:

You can't take that seriously. Really, you can't. At least not from someone who is supposed to be a legitimate critic.

But then I see pictures of him and think "wow...he's really hot."

See my conundrum now? He may be a terrible critic...but the boy is gorgeous.

Does that make up for quotes like the one above? Not really...but it doesn't hurt. I'm no fan of At the Movies since he and Ben Mankiewicz took over...but at least he's something nice to look at while Mankiewicz tries in vain to inject some intelligent discussion.
Email Post

J.D. said…
He is good-lookin', I'll give him that. But his epic toolness is such a gigantic turn-off to me that I just do not care.
7:54 PM

Anonymous said…
Is it just me or does Ben Lyons more often get to do his top three pick and more often engage in the new feature of the "critics roundup?"

Matthew Lucas said…
Okay maybe not gorgeous but he's still damn good looking. It's a shame about everything else.
12:18 AM

Anonymous said…
As a long-time Siskel & Ebert fan, I was disappointed by the axing of real critics and thought this "new" show was merely tolerable--have it on in the background while you are reading your email. Then I started paying attention and realized what a train-wreck Ben Lyons really is . . .