For years, Jesus Christ Superstar was a Holy Thursday tradition for my family growing up. It's been a few years since I've been able to continue that tradition, but this week I decided to resurrect the tradition and revisit the film. It has always been my favorite screen adaptation of the story of Jesus, but this time it struck me differently than it ever had before; it felt somehow more radical, more subversive, and ultimately more hopeful. 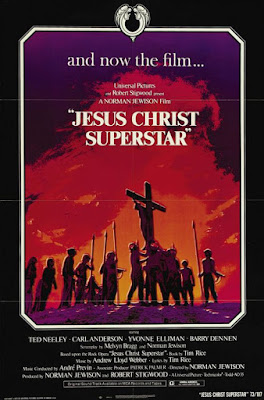 The story of Jesus has often been plagued by a strenuous sense of reverence in the Biblical epics of old, the notable exceptions being Scorsese's controversial The Last Temptation of Christ (1988) and Nicholas Ray's more politically minded King of Kings (1961). But Jesus Christ Superstar is a different animal altogether, a metatextual meditation on Jesus' humanity as told by a group of hippies putting on a play in the Israeli desert.  Like Last Temptation, Jesus Christ Superstar explores the inherent conflict between Jesus' divinity and his humanity, with Jesus' signature number "Gethsemane/I Only Want to Say" becoming an impassioned argument between Christ and his Heavenly Father about the necessity of his sacrifice. The juxtaposition of Jesus as both divine savior and simple man from Galilee struggling with his own human frailty and the burden of such a massive responsibility thrust upon him. Here, he questions if he even wants to be the savior of humanity, because the humanity on display almost seems beyond all hope.

And that's what really sets Jesus Christ Superstar apart. The thing that struck me the most watching the film this time was the way it illustrates the inherent selfishness of the movement that sprung up around him. Even amongst his disciples, the constant refrain is “what can you do for me Jesus?” - almost as if they had missed the point of his message entirely. Nearly every number has Jesus preaching a message that his followers immediately spin into “won’t you do THIS for ME Jesus?” The radical service, the message of the the triumph of the meek and marginalized against the authorities and the elites, ultimately becomes much smaller and insular in the hands of flawed humans - the potential for massive change centered around the least of these becomes a message simply of personal salvation without looking beyond what it can do for them. 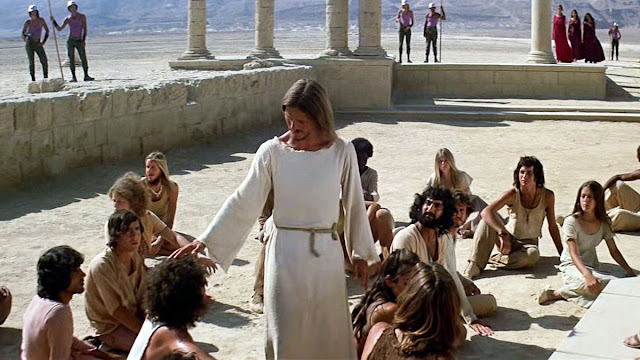 With so much of modern Christianity centered around the idea of simply believing in Jesus above all else, I found this particularly haunting. "I believe in you and God so tell me that I'm saved" Simon pleads in "Simon Zealotes," as if his whole reason for being there is to save his own skin. Evangelists often ask "do you have a personal relationship with Jesus Christ?" But what that really means often gets lost in the quest to win converts rather than actually spreading Jesus' radical, anti-establishment message, one that constantly advocates for "the least of these" and stood against powerful elites who used faith to make money off the backs of the poor and marginalized. This Jesus feels tired, weary from not only the expectations placed upon him by his followers, but from having to explain himself over and over again on seemingly deaf ears. While his disciples vie to be the most loyal and the most believing, Jesus is laying out a roadmap for a better world, and the reaction seems to consistently be "yeah but what can you do for me?"

I think somewhere among the desert ruins, sparse sets, and anachronistic costumes, director Norman Jewison and the songwriting team of Andrew Lloyd Webber and Tim Rice arrived at a profound truth about Christianity. It may not be a "Christian" film in that it adheres strictly to religious doctrine, or seeks to convert its audience, but hidden amongst the catchy tunes is something at once painful and deeply moving, a portrait of a broken humanity, selfish and self-aggrandizing, interested only in how the savior can save them. And he makes the choice to die for us anyway. Therein lies the heart of Jesus Christ Superstar, a rock opera with a distinctly 70s aesthetic that nevertheless has more to say about the nature of Jesus than any number of ponderous Biblical epics or sanctimonious faith-based films that are so prevalent today. It holds a mirror up to the audience - and for those of us who are Christian dares to ask us why? Do we believe out of fear for what we are told could happen if we don't? Are we asking what Jesus can do for us? Or what we can do for Jesus? Are our prayers selfish or selfless? In the film it is only Mary Magdalene, here portrayed as a prostitute, an outcast, looked down upon even by the disciples, who gives Jesus what he needs here and now - washing his feet while his followers preen and posture about what battle to fight next, completely unable to see the savior's message of simple service and humanity. They don't seem to understand that Jesus has already won the war, and given them a blueprint for a more hopeful future - "Sing me your songs, but not for me alone. Sing out for yourselves, for you are blessed." And yet rather than get to work building it themselves they wait for him to do it for them.

"I believe in you and God so tell me that I'm saved!" They exclaim. It doesn't register that they already are. What the Jesus of Jesus Christ Superstar asks is "what next?"
Email Post