Originally released in theaters on March 6, Disney/Pixar's Onward had the unusual misfortune of having its theatrical run interrupted by a global pandemic. It was still at the top of the box office when most theaters shut down around March 19, making it Pixar's lowest grossing film to date. It's unfortunate because Onward is quite a lovely film, even if it doesn't quite measure up to the studio's greatest triumphs like WALL-E, Finding Nemo, Up, Toy Story 3, Inside Out, and Coco. 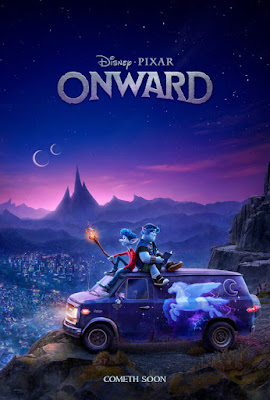 As a result of the pandemic, Disney ultimately decided to cut their losses and debut the film on its streaming service, Disney+, months ahead of schedule, which means its now available for free to anyone with a subscription at a time when it should have still been in theaters. This is an unprecedented move for a major studio, but it's also an opportunity for people who are sheltering in place, especially those with children, to enjoy the film sooner rather than later from the comfort of their own homes.

Set in a world of mythological creatures where magic has all but been forgotten amongst the more immediate magic of modern technology, Onward tells the story of two brothers, Ian (Tom Holland) and older brother Barley (Chris Pratt), who couldn't be more different. Ian is a shy bookworm, Barley is a boisterous adventurer with a love of fantasy and lore. On Ian's 16th birthday, their mother gives them a final gift left by their late father: a magic staff that will allow their father to come visit them one last time for 24 hours only. Thrilled to finally meet the father who died before he was born, Ian activates the staff but botches the spell, only managing to resurrect his father's legs before the magic crystal is depleted. So Ian and Barley set off on a quest to find a new crystal, their father's legs in tow, with only 24 hours before he disappears forever.

Naturally, the journey ends up being much more important than the destination, and Ian learns that despite years of longing for the dad he never had, he missed the dad who was right in front of him all along. Onward is a charming adventure about brotherly bonding, family ties, and searching for magic in a world that seems to have forgotten what magic really is, which is an interesting message coming from a studio that has spent the past few years shamelessly recycling its own past through nostalgic remakes of beloved films. Still, there's something strangely comforting in this time of national uncertainty to be found in this film about rediscovering simple magic in a world governed by technology.

Stylistically, the film often feels more like a Dreamworks film than anything Pixar has ever made, the character design and more pop culture oriented humor doesn't quite feel as timeless as the very best Pixar films, but it's a pleasant and consistently entertaining film that has that "comfort food" sheen that's hard to resist; and in such a dark time it often feels like just the balm we nee to take our minds off our troubles if only for a couple of hours.