After receiving four Oscar nominations in 2012 for his directorial debut, Beasts of the Southern Wild, including Best Picture and Best Director, Benh Zeitlin seemingly disappeared from filmmaking, only surfacing a few times to produce or compose scores for a few indie films that never saw wide releases. Now eight years later he has returned to directing with his sophomore feature, Wendy, a modern re-imagining of Peter Pan that puts young Wendy Darling (Devin France) at the center of the narrative. 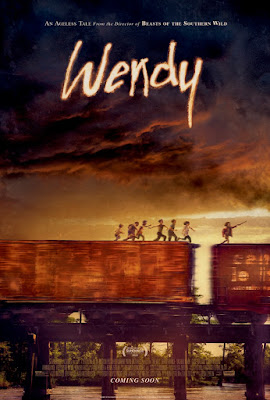 Here, Wendy is the daughter of a rural train station waitress who dreams of hopping on a passing train and exploring the world beyond. She spins tales of fantastical worlds reached by lost boys who ride the rails to freedom, never growing up, existing in a kind of limbo of eternal childhood in the memory of those they left behind. Inspired by her stories, Wendy and her brothers James (Gavin Naquin) and Douglas (Gage Naquin) hop on a freight train bound for nowhere, and encounter Peter Pan (Yashua Mack) and his gang of lost boys, who take them to a deserted island far away, where their days are filled with magic and adventure.

That is until one day they discover the island is also populated with adults, children who lost their sense of hope and wonder and grew old, forgetting what it was like to be young. A series of tragedies and setbacks puts them on a collision course with the Neverland adults, leading to the rise of Captain Hook and the creation of a myth that will inspire them to stay young at heart even as their bodies grow old.

There's something inherently appealing about this reworking of the Peter Pan myth, but coming eight years after the sensational Beasts of the Southern Wild, Wendy feels like a regression, a half-drawn sketch of a much deeper exploration of a familiar tale. Not only is it visually unappealing and sloppy in its execution, it often feels like a retread of the ideas and themes already explored in Beasts. Wendy even delivers a near beat-for-beat recap of the famous “Once there was a hushpuppy” monologue. The whole thing just feels torpid and uninspired, a germ of an idea that never made it past the development stage.

Young Devin France is a strong lead and a great discovery, but she’s cast adrift in a film that doesn’t know what to do with her. It brings nothing new to the story to justify its reframing, and its new mythology feels half-baked. Wendy's musings on growing up and adulthood are underlined and written in bold, but the story is lifeless and broadly drawn, taking vague inspiration from the legendary pages of J.M. Barrie's novel and removing all its sense of wonder and cohesion. Moments clearly designed to be moving and profound fall flat because they haven’t been given the proper context to be earned, as if it's forcing the Pan myth to fit its own story rather than radically reimagining it. Even the score by Zeitlin and Dan Romer feels like an almost note-for-note reprise of their thrilling musical themes from Beasts of the Southern Wild.

It's a film of muddled mythology and listless characterization, burying its sense of childhood magic in drab new trappings that feel bland and uninspired. It's certainly disappointing as a belated follow-up to Zeitlin's incredible debut, but by bringing nothing new to the table or having anything else to say in its reworking of Peter Pan, it feels like an incomplete concept in search of a heart that it never quite finds. Just as the lost boys desperately search for a mother, so too does Wendy fruitlessly search for a point of view that it never manages to find.