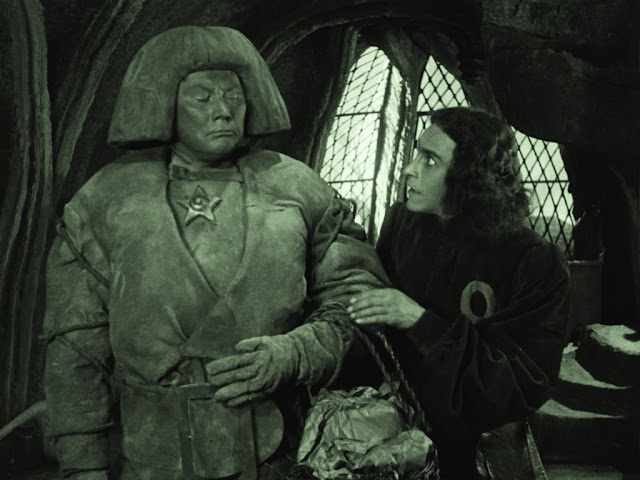 Perhaps one of the most famous of the German Expressionist films, Paul Wegener's The Golem: How He Came into the World is one of the most visually striking films of the silent era. With its curved architecture and unique set design, it stands alongside The Cabinet of Doctor Caligari and Metropolis as one of the quintessential examples of Expressionism in film. 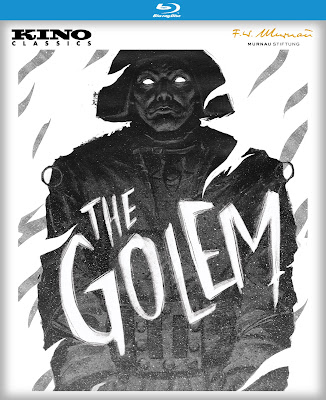 Few other films of the era took such a radical approach to its overall design. Nothing in the film is practical or "realistic," from its twisted staircase to the misshapen buildings of the ghetto in which it is set. And yet everything about the film seems based in a kind of recognizable milieu that makes its off-kilter sets seem like something out of a dream, as if we're wandering through the haunted landscapes of our subconscious mind.

The story is inspired by Jewish folklore, in which a rabbi brings to life a monster made of clay in order to defend the Jewish people from persecution. It is believed that the Golem myth provided the basis for Mary Shelley's "Frankenstein," and there are certainly some parallels in Wegener's Golem that foreshadow James Whale's take on Frankenstein 11 years later, especially in the Golem's interactions with children near the film's end. Because the rabbi makes a deal with an evil spirit to bring the Golem (played by Wegener himself) to life, he loses control of the creature and must deal with the personal consequences of summoning a monster to do his bidding, even if his intentions were noble. It's a classic morality play, a warning about fighting evil with more evil, and the personal toll of revenge played out in the increasingly ominous streets of the ghetto.

Wegener had previously tacked the Golem myth in 1915's The Golem, a film now mostly lost to time, which took place in the 20th century after the ancient creature was reawakened. This 1920 prequel, The Golem: How He Came into the World,  explores the original 16th century  myth of Rabbi Loew (Albert Steinrück) and the consequences of human arrogance in creating life. As one of the earliest remaining feature length horror films (released not long after seminal Cabinet of Doctor Caligari), it holds a special place in film history, and remains one of the most beautifully designed and evocative films of its time, and it hasn't lost any of its eerie luster in the century since its release. Wegener was not a particularly prolific filmmaker (the 1920 Golem is his most widely seen surviving film), but his vision was undeniable, and Kino Lorber's new Blu-Ray breathes new life into the now 100 year old film with a flawless new  4K transfer of the German release version, featuring three scores, as well as the shorter US release version and a comparison essay between the two cuts of the film. 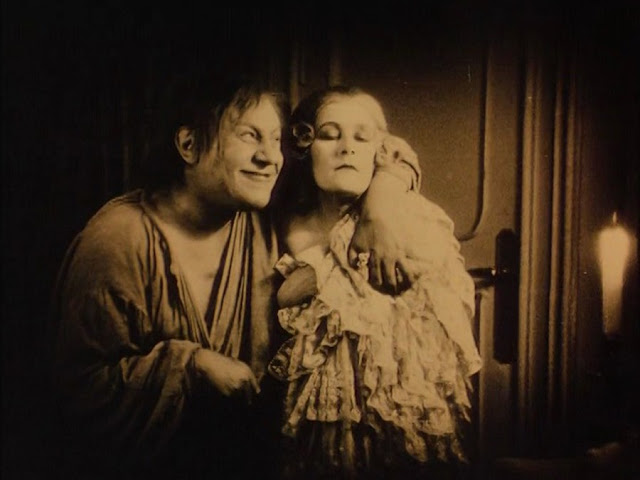 F.W. Murnau adapts Moliere's classic play of religious hypocrisy in 1925's Tartuffe, which frames Moliere's original story as a film-within-a-film inside another narrative. While Tartuffe wasn't the first film to conceive of such a device (Buster Keaton's 1924 comedy, Sherlock, Jr., is the earliest example I've been able to find), it is somewhat unique for its time - making it a rare film in which most of action takes place in a film that other characters are watching. 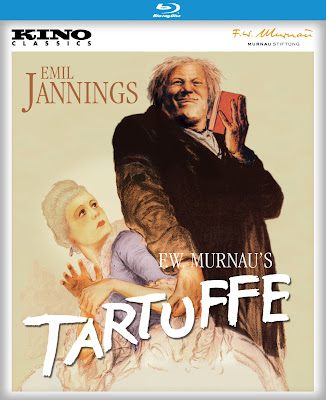 The modern day framing device centers around an unscrupulous housekeeper (Rosa Valetti) trying to convince her wealthy master (Hermann Picha) to cut his grandson (André Mattoni) out of his will and leave everything to her, because the young man has chosen to become an actor. Upon learning of the housekeeper's scheme, the grandson disguises himself as the leader of a traveling film troupe on tour with a film version of Tartuffe  bringing the film to his grandfather's home in order to open his eyes to the housekeeper's scheme.

The resulting version of Tartuffe is heavily abridged from Moliere's classic text. The basic idea is the same - Tartuffe (Emil Jannings) is a  religious zealot who uses his piety to control others and drain them of their wealth. When he arrives at the home of his latest victim, Orgon (Werner Krauss), Orgon's wife (Lil Dagover) immediately recognizes Tartuff for the charlatan he is, and sets out to expose him to her brainwashed husband. The story mostly focuses on her attempts to reveal Tartuffe's true nature, leaving the meat of Moliere's text cut down to a sort of Cliff's Notes summary. The essential thematic content remains the same, but Jannings' choice to play Tartuffe as a gruff, boorish brute rather than a charismatic, manipulative cad seems to undercut the story's essential message about being wary of charming hypocrites who disguise their true nature in false piety.

Murnau is, of course, an incredible visual stylist, and the golden-tinted hues of Karl Freund's cinematography are often breathtaking. But Tartuffe is ultimately one of Murnau's minor works - its all-too-brief 74 minute running time barely giving the story time to breathe, and the normally terrific Jannings seems miscast here, his penchant for overacting smothering the legendary character. The framing device also seems unnecessary - its attempt to connect Moliere's themes to modern times feels redundant, taking precious minutes away from the already truncated story it sets out to tell.


Now available on Blu-Ray and DVD from Kino Lorber.