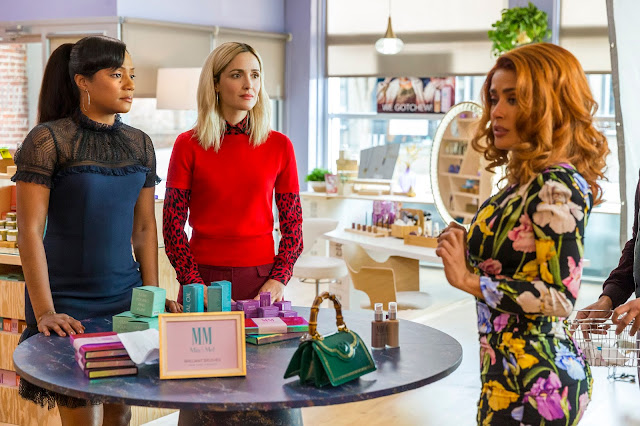 Tiffany Haddish is an actress whose unique comedic talent has for some reason stumped nearly every filmmaker she's worked with thus far. She's a force of nature, a wild dervish whose anarchic sense of humor devours nearly everything in its path, and yet for some reason filmmakers keep saddling her with substandard scripts that constrain and confine her in a box rather than letting her shine. 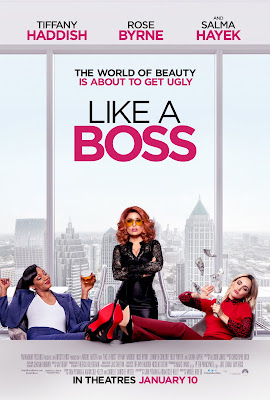 Such is the case yet again with her latest film, Like a Boss, a film that casts her as makeup entrepreneur Mia, who along with her childhood best friend, Mel (Rose Byrne), runs a small makeup business called Mia & Mel. Mia is the creative mind, while Mel handles the books - but the business isn't doing well, drowning in major startup debt despite selling some moderately successful products. Some of these ideas reach the desk of Claire Luna (Salma Hayek), world-famous executive of Oviedo makeup, who offers to invest in their company - but there's a catch. If either Mia or Mel leaves the company for any reason, Claire assumes 51% of the company's stock, essentially taking over the business and making it her own. She immediately sets about driving Mia and Mel apart, and the two have to overcome their differences in order to save their business and put Claire in her place.

Miguel Arteta is a talented director, with films like The Good Girl, Chuck and Buck, and Beatriz at Dinner under his belt. But Like a Boss reeks of a director-for-hire job, completely devoid of any passion or personality. The by-the-numbers script does its cast no favors, saddling Haddish with lame one-liners and completely wasting reliable supporting players like Billy Porter and Jennifer Coolidge. Very few of the jokes really land, and its message of girl boss empowerment feels watered down in an awkward celebration of late-stage capitalism in which the pair attach themselves to yet another major corporation in order to find their definition of success. That idea that you have to sell out for millions in order to be truly successful ultimately runs counter to its protagonist's idea that beauty comes from within, and that makeup should enhance one's natural features rather than cover them up. But to go much deeper down that rabbit hole is already giving too much credit to a film that obviously has very little on its mind.

It's not just not funny, it's anti-funny, a film that seems to suck the humor from every moment like a comedy black hole. It forces Salma Hayek to strut around in a ridiculous caricature while coasting on tired jokes about her accent, while Haddish and Byrne are given little to do other than bicker in increasingly outlandish situations that seem like desperate attempts to mine laughter from an already depleted source. There's just nothing interesting going on here; no laughs, a talented star held prisoner by an abysmal script, and an awkward sense of pacing that makes its seemingly brief 83 minute running time nearly interminable to sit through.