It isn't often that you see a film from a director so young that is so assured in style and personality that the filmmaker's unique voice and presence seems to have manifested on screen fully formed and wholly confident in its own power. That's not to say that Kantemir Balagov's Beanpole is a masterpiece to rival all-time greats films directed by twenty-eight year olds like Citizen Kane, but Balagov directs with such a clear voice that it's astonishing that this wasn't directed by a filmmaker with years of experience under their belt. 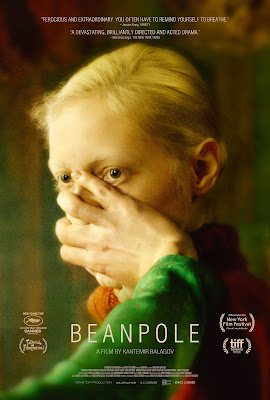 Early films are often bold and brash artistic statements of a young talent with something to prove. Beanpole, on the other hand, is something quite different altogether. Set in Leningrad in the days after WWII, the film centers around two women struggling to survive in the bombed out city. Surrounded by rampant starvation and homelessness, both women struggle to adjust to civilian life after returning from the front. Iya (Viktoriya Miroshnichenko, in an astonishing debut performance), nicknamed Beanpole because of her tall, skinny frame, suffers from a traumatic brain injury that leaves her prone to fits of freezing up and trembling. She has a young son named Pashka (Timofey Glazkov) who has adjusted well to life in the military hospital where his mother now works as a nurse. Her friend, Masha (Vasilisa Perelygina) is also seeking a job at the hospital, but she carries with her a dark secret. And when a tragedy rocks their insular little world, it sets the two on a path of self-discovery and self-destruction that could change their friendship forever.

To delve much deeper into the twists and turns of Beanpole would ruin the painful beauty of its discoveries, but Balagov handles its tricky emotional territory with an unblinking eye. This is a world where tragedy has become so commonplace that the film depicts often horrific acts with something of a shrug. War has made death an accepted inevitability, and it was women who bore the brunt of the grief. The nurses tend to shell shocked soldiers, performing assisted suicides for those who can no longer bear the pain. But they also have to contend with the pain of their own existence in a world that has moved on from the war that they are still fighting in their own mind, stained by trauma that the rest of the world can't understand.

Beanpole is ultimately about the things people are willing to do to survive in extreme circumstances, but the way in which it focuses on the inner world of its characters is both its greatest strength and its greatest weakness. By making this a rather insular character study rather than a historical portrait of life in a post-war Soviet Union, Balagov is able to examine the personal toll of not just war, but on the stagnation of a besieged city for whom austerity and death becomes a way of life. This also allows the film to interrogate the unique toll the war took on women - both those left behind and those who joined the armed forces either as soldiers or as comfort women, only to be discarded when the war ended and now irreparably damaged both emotionally and as a member of society.


And yet the film's insular focus also makes its characters somewhat opaque, the emotional waters often obfuscating because of the characters' somewhat unknowable nature. Beanpole herself remains something of an enigma, a passive character to Masha's more aggressive presence. While that passivity is very much part of who she is and why she's in the situation she's in, she makes for a somewhat impenetrable central character on which to hang much of the story's emotional weight.

Stylistically, the film much stronger, and it is here where Balagov's voice shines the strongest. Its color palate is reminiscent of Amélie, featuring drab interiors that come alive with vibrant reds and greens. But this is no fairy tale romance. Balagov creates a somber yet enchanting vision of a shattered dream world populated by ghosts, its characters shadows of the people they once were before the war. It's an intoxicating and often heartrending evocation of wartime's human toll, and under Balagov's strikingly confident direction it creates a world of complicated emotions and unspeakable trauma. And yet that trauma often remains too broad to have a truly lasting impact. There are moments here that will no doubt leave an impression, in large part due to the Miroshnichenko's striking depiction of Christ-like suffering in the post-War Soviet Union. She and Balagov are no doubt major artists to watch, their unique voices speaking loud and clear even when the film itself misses an opportunity to take a deeper dive into its characters' haunted world.