The specter of imperialism hangs over two new French films like a shadow, an inexorable piece of the nation's past from which it cannot extricate itself. Ladj Ly's Oscar-nominated Les Misérables (2019) and Bertrand Bonello's Zombi Child (2020) take very different paths to arrive at similar conclusions, and yet they make for a fascinating double feature if for no other reason than to study how the differences in their perspectives lead them to different places, even if their ultimate thematic content isn't all that dissimilar. 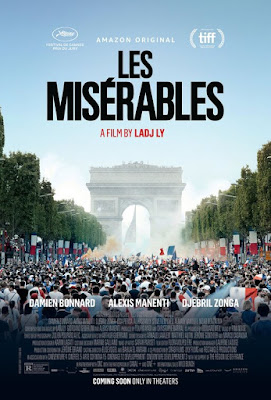 Inspired by the 2005 French riots, Les Misérables explores the tensions between police and the often majority black neighborhoods they are tasked with patrolling. The film centers around Brigadier Stéphane Ruiz (Damien Bonnard), a rookie cop who joins the force and is shown the ropes by his two new partners, Chris (Alexis Manenti) and Gwada (Djebril Zonga). Ruiz quickly learns that this is not going to be just another day at the office, however, as hot-headed Chris treats the people of the neighborhood as his subjects, abusing his authority and stoking the flames of interracial tension between local gangs at every turn. When a young boy steals a lion club from a local circus, those tensions threaten to boil over, leading to a violent confrontation between the boy and the police that throws gasoline on the smoldering embers of resentment.

The film wears its inspirations on its sleeve; the most frequently cited are Spike Lee's Do the Right Thing and Mathieu Kassovitz's La Haine, but Antoine Fuqua's Training Day is in there as well. It's a slow-burn that deftly combines its varying factions that make up the melting pot of France - the black teenagers, the Muslims, the Romanians, and pits them against a police force that doesn't seem to understand or care about their unique needs and cultural differences. Yet the neighborhood is also deeply representative of French colonialism, policed by an uncaring and brutal force that doesn't seem interested in anything other than power over those it deems lesser.


Similarly, Zombi Child takes place in a France that seems wholly ignorant of the world it has colonized, vacuuming up small pieces of other cultures and discarding the rest. Here, a group of schoolgirls welcomes a Haitian classmate into their clique, only to discover that her family has a background in voodoo. As she regales them with stories of her grandfather, who was turned into a zombi by his family in order to work the fields as an unquestioning slave, the girls become fascinated with the world of voodoo, leading them to meddle in places where they do not belong. 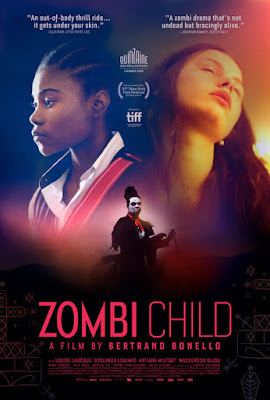 Meddling in places where one does not belong is essentially the cornerstone of both of these films. On the one hand, Zombi Child is a hushed and haunted ghost story that combines Haitian lore with French colonial sensibilities. Bonello, a white filmmaker, isn't necessarily trying to colonize the Haitian voodoo imagery as he is use it to explore the way that the French have seemingly bulldozed over the cultures of the places they've colonized, and how their lack of understanding of those cultures puts them on a path of mutual destruction. Ly, a black filmmaker, takes a similar view in the more conventionally structured Les Misérables. Both films center their white characters, and yet strangely Zombi Child feels like the most pointed brutal critique of imperialism. It's easily Bonello's most subdued film, dialing back the style in favor of something more unsettling and atmospheric. This is a far cry from the portrait of young anarchists in his last film, Nocturama, with its neon lighting and 80s-infused soundtrack. There's something hushed and eerie about Zombi Child that explores the sinister underpinnings of imperialist conquest without othering Haitian culture.

Les Misérables, on the other hand (which was famously submitted for Oscar consideration over Celine Sciamma's superior Portrait of a Lady on Fire), attempts to show us that even the most well-intentioned white people can face consequences if their actions continue to prop up institutional racism. No one is innocent here, and while its trappings may seem more familiar (although Bonello certainly takes some of his cues from Val Lewton's 1943 horror classic, I Walked with a Zombie) there is something agreeably rough-hewn about its structure and haunting about its denouement. Ultimately I'm inclined to call Zombi Child the stronger of the two films, if for no other reason than for its unique take on a tired genre, but it's hard to deny the the effectiveness through which both convey their ideas. One, a more straightforward drama, the other as a horror film where the scares are much more internalized, both creating horrific portraits of the ravages of colonialism and the continued proliferation of racist institutions that refuse to acknowledge their own culpability in a failed system. Taken together they are unmissable portraits of a modern France grappling with its own identity, with Ly acting as a Malian immigrant critiquing French colonialism as one of its victims and Bonello acting as a Frenchman crafting a bold work of self-examination. Two different filmmakers, two different perspectives, two bracing works of political activism through cinema. Yet only one truly transcends its medium and works its way under the skin - Zombi Child manages to work as both an otherworldly romance and a ferocious critique of cultural colonialism that lingers with the understated power Bonello's more indelible works.