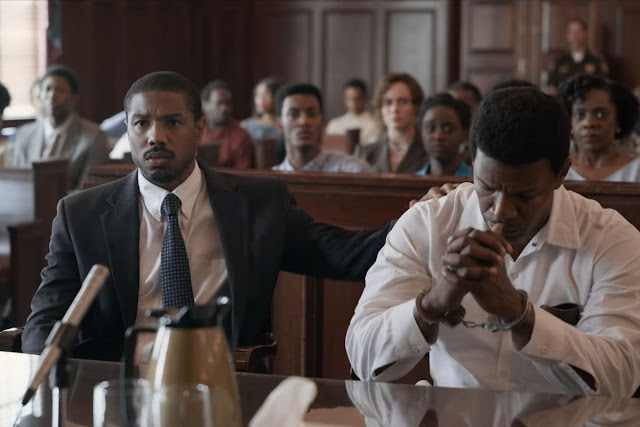 The unjustly accused man is not exactly a new subject in movies - from popular prison dramas like The Shawshank Redemption and The Green Mile to documentaries like The Thin Blue Line to TV series like Ava DuVernay's recent Netflix show, When They See Us, there is something inherently compelling about the idea of someone who has been wrongfully accused of a crime fighting for justice. 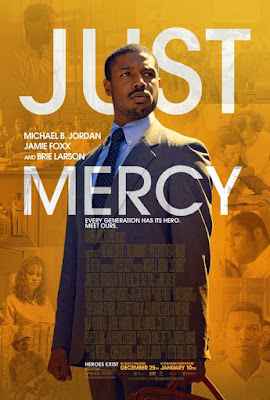 Yet that drama takes on a new meaning when the story is true. And although Destin Daniel Cretton's Just Mercy covers some very familiar territory, there's a sense of righteous anger rumbling beneath the surface that is hard to shake. Based on the book by Bryan Stevenson (Michael B. Jordan), the film chronicles Stevenson's work with the Equal Justice Initiative on behalf of prisoners on death row. It is during one of his visits to a prison in Alabama that he meets Walter McMilllan (Jamie Foxx), a black inmate who was accused of murdering a white woman based on faulty testimony and sentenced to death. McMillian had long since given up hope of ever finding justice, but Stevenson becomes determined to get him a new trial and prove his innocence. But deep-seated institutional racism and a justice system that refuses to admit any fault in itself stands defiantly in his way.

Cretton, who first burst onto the scene with 2013's charmingly dysfunctional Short Term 12, directs the film as a fairly standard "issue drama," breaking no new ground or attempting to make the familiar material more inherently cinematic like, for instance, Barry Jenkins' exploration of similar territory in If Beale Street Could Talk. And yet I can't remember the last time I saw a film treat the death penalty with the kind of gravity it deserves. There's a scene about midway through Just Mercy in which one of McMillan's fellow inmates is executed by electric chair, and rather than treat it as some sort of dramatic device, Cretton focuses on the prisoner's experience; the dread, the pain, the regret, the fear are all painfully palpable. It's a harrowing scene, but not because Cretton is milking it, but because he's putting the victim of a state-sanctioned murder front and center.

For me, that's the defining characteristic of Just Mercy - the way in which it centers the victims at the heart of its narrative and makes their experiences and their humanity a cornerstone of the narrative. This isn't just Stevenson's story, it's McMillan's story, and Cretton's framing of the narrative elevates the film above its muckraking roots. It may not be subtle, it's certainly preaching to the cheap seats, but I'll be damned if this thing doesn't rattle the rafters. Here, in the land that gave birth to Harper Lee's "To Kill a Mockingbird" (a fact the local authorities love to brag about with seemingly no sense of irony or self-awareness), a black man stands accused of a murder he did not commit by a system designed to uphold whiteness and punish blackness at all costs. And while having its heart in the right place doesn't necessarily make a film good, it's hard not to get swept up in the human drama of it all.

Buoyed by strong turns by Jordan and Foxx, Just Mercy treats stock characters like human beings, centers the victim’s story, and refuses to ignore the collateral damage of wrongful convictions. It may be unremarkable in construction and execution, its building blocks well worn and familiar, but there's something deeply humane about the way Cretton frames this story, so that by the time we reach its foregone conclusion the catharsis feels earned and justified. It's enough to make us forget, if only for a moment, that we've seen all this before, but rarely with such empathy and trembling thirst for justice.