Have you ever looked around at your family, marveled at their idiosyncrasies, and thought "someone should make a movie about us?" That's basically what director Ben Mullinkosson has done with his documentary, Don't Be a Dick About It, a warmhearted and hilarious verité look into the lives of his two cousins, Peter and Matthew. 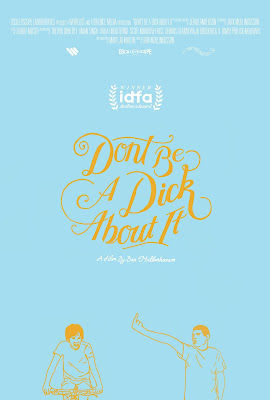 Peter is autistic, he loves "Survivor" and the letter C, but hates the Westboro Baptist Church. Younger brother Matthew is still in high school and is trying to overcome his crippling fear of dogs with the help of his mother. They love each other deeply, but also drive each other crazy, and therein lies the simple heart of Don't Be a Dick About It. Anyone who has grown up with a sibling understands every moment of what these two go through, loving each other one minute and loathing each other the next. Peter wants to organize a real-life family game of "Survivor," blithely "voting people off" when they annoy him, which Matthew does...often.

Matthew, a teenager for whom appearances are important, is also frequently embarrassed by Peter's lack of social awareness and his penchant for engaging strangers in conversation. He spends much of the film needling Peter's obsessions in ways that seem perfectly calibrated to piss him off. And yet, although they spend much of the film at each other's throats, their brotherly antics never feel mean spirited or annoying, because it's all so very real.

Mullinkosson directs with a wry sense of humor that allows the boys antics to speak for themselves, never condescending to them or using them as the butt of any jokes. They're funny simply because they're brothers behaving as brothers so often do, and his keen understanding of their relationship informs the film's human core. It finds emotion in its tale of sibling rivalry without feeling mawkish, getting to the heart of their bond that transcends the petty squabbles in which they so frequently find themselves. That he manages to capture their personalities so indelibly in the course of only 69 minutes is a testament to his skill as a filmmaker, quickly establishing the personalities of these two men and inviting us, if only an hour, to join them in their world. It's a touching, often hilarious look at life with a sibling who drives you absolutely crazy, but you can't get enough of them anyway.


DON'T BE A DICK ABOUT IT | Directed by Ben Mullinkosson | Not Rated | Now playing in select cities.