It's been 16 years since the American remake of The Grudge was released in theaters (the original Japanese film, Ju-On, was released two years earlier in 2002), and since that's approximately 128 in Hollywood years, it's time for a cheap January remake to come slithering into theaters to start the 2020 movie season. 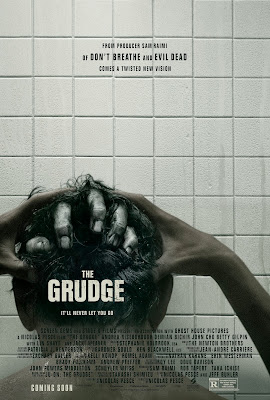 Like most remakes, The Grudge feels wholly uninspired and unnecessary, but since it's a remake of a remake that no one seems to have any nostalgic feelings for, one has to wonder what the point of it all was in the first place. The plot centers around a policewoman (Andrea Riseborough) whose murder case takes a dark turn when she begins to realize that the death was the result of a curse on a house where a woman went mad and killed her husband and daughter before killing herself. As it turns out she had recently travelled to Japan, where she picked up a "Ju-on," an unbreakable curse that occurs when someone dies in a moment of extreme rage.

The film follows the curse through three separate stories - there's Riseborough grieving policewoman trying to solve the case, there's an elderly couple (Frankie Faison and Lin Shaye) and their palliative care nurse (Jacki Weaver) suffering from the house's curse, and a real-estate agent (John Cho) who comes under its thrall. The biggest issue is that the timeline connecting these three stories is hopelessly muddled, and Cho's story has little to do with the other two stories going on around him.

Yet for a film with far too many plots going on, it's a surprisingly dull, languidly paced affair, its energy never building toward any sort of climax, it just ambles along with Riseborough acting as the audience proxy until it just ends. There are a few nifty uses of lighting, in which director Nicolas Pesce (who previously directed the fantastic The Eyes of My Mother) illuminates ghosts in darkened rooms using the glow of a bedside digital clock or the dim light of a phone screen. It also boasts an impressive cast. But these glimmers of hope are few and far between, the trifecta of Riseborough, Weaver, and Demián Bichir are completely wasted and the rest of the film is under-lit, as if it were filmed through a lens tinted the color of mud.

There's also a scene in which a character refers to a character as "one of those assisted suicide broads," which begs the question - what year is this supposed to take place? Ye olde ancient times of 2004 to 2006 for some reason. If nothing else, it's an indication of just how poorly conceived this film is - an unpleasant, humorless slog through the muck of low-budget January horror fodder that is neither frightening or particularly entertaining, blandly ambling from tired jump-scare to tired jump-scare in order to cash-in on a modest 16-year-old hit for which few have any real warm nostalgic feelings, leaving one to wonder who the audience for this was in the first place.