Despite the title, Preston Sturges' Christmas in July has absolutely nothing to do with Christmas, or anything related to the holiday season. But even if you're coming to the film expecting some sort of under-seen holiday classic, there's still a lot to like in this charmingly acerbic tale of a of an ambitious working stiff (Dick Powell) who thinks his ship has finally come in when some scheming co-workers trick him into believing that he has won the $25,000 Maxford House slogan contest.

His slogan is, of course, terrible - a goofy play on words that makes little sense because he thinks coffee is supposed to put you to sleep. "If you can't sleep at night, it's not the coffee - it's the bunk!" becomes the film's hilarious refrain, as the mistakes and miscommunications eventually reach a breaking point. At only an hour long, Christmas in July is a breeze to watch, and Sturges packs the brief running time with plenty of his trademark wit, skewering corporate vanity and overconfident male bluster in equal measure. Sturges was a filmmaker with a keen eye for the plight of the working man, and the idea that working people are reduced to essentially playing the lottery just to get noticed by the men at the top is the film's bittersweet heart.

This early talkie musical follows a plot that was already familiar by 1929 - a girl from nowhere dreams of joining the Follies, and runs away to New York to join the great Ziegfeld's company. Along the way, she falls under the sway of an unscrupulous entertainer who attempts to hitch himself to her coattails and capitalize on her ascendant fame.

Essentially an extended advertisement for the Ziegfeld Follies, the film ends with what's essentially a variety act showcasing some of the biggest talents on Broadway, including Eddie Cantor, Rudy Vallee, and Helen Morgan doing everything from comedy routines to dance numbers to surprisingly sexy tableaus. It also features some lovely examples of early Technicolor which, although somewhat washed out and greenish in relation to later Technicolor films, but it has been beautifully restored, and the color gives the otherwise flat staging some much needed depth. It's actually better than that year's Oscar winner, The Broadway Melody, and while this one suffers from some of the same problems that the infant sound recording technology gave filmmakers, the static mise-en-scene is kind of fascinating, and the tableau scene is surprisingly erotic, featuring an array of barely dressed men and women reenacting historical paintings. Filmmaker Millard Web did the best he could with the material provided, and the results are mostly charming if not exactly inspired. 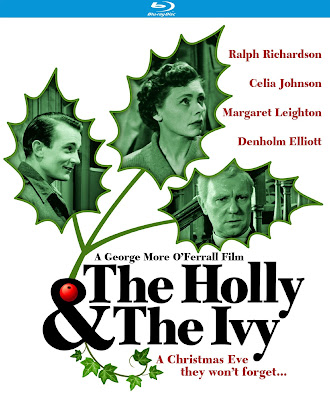 THE HOLLY AND THE IVY (Kino Studio Classics)

A family gathers for Christmas and uncovers old wounds in George More O’Ferrall's 1954 holiday drama, The Holly and the Ivy. There are a lot of issues at play here, none that really get the individual attention they deserve in the film's brief 84 minute running time, as the family confronts  the pressures of being raised by a minister whose pastoral duties always seemed to take precedence over his own family.

The film attempts to explore issues of atheism and alcoholism, and the pressure on pastors' families to somehow be perfect in the public eye, but it never delves into any of its themes too deeply, and the central conflict is resolved rather quickly. As the son of a pastor myself I appreciated the film's interrogation of the sometimes self-imposed expectations placed on preachers' families to be an extension of their ministry whether they want to or not, but the film never really grapples with these ideas beyond a surface level, as the family members attempts to hide behaviors that may reflect poorly on their father ultimately discover there was nothing to worry about at all. A great cast, including Celia Johnson and Denholm Elliot, add some heft, but the film ultimately feels like a missed opportunity. 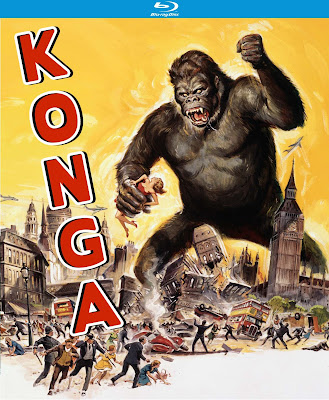 A mad scientist (Michael Gough) returns after being presumed dead from a plane crash the jungles of South America with a wild plot, to combine plant and animal DNA in order to make animals grow to enormous size. His first experiment is a chimpanzee named Konga, whom he blows up to human size and turns into a killing machine in order to silence his rivals and enemies.

The ape suit is pretty terrible, and the special effects strictly second rate, even for 1961, but despite the fact that its low budget sometimes shows at the seams, Konga is a surprisingly great piece of science fiction that isn't afraid to take chances and center on unlikable characters. Gough's Dr. Decker not only goes mad with power, he's also a lecherous creep who lusts after a young college student in his care, and uses Konga to clear the playing field of potential rivals for her affection. This, ultimately, is his undoing, and the film makes no attempt to make him in any way redeemable. In that way, it's like a #MeToo movie long before that was even a thing. While the goal to be a British answer to King Kong is ultimately a failure because the effects can't hold a candle to that film's groundbreaking stop-motion effects from nearly 30 years earlier, Konga is nevertheless a beautifully shot, colorful B-movie about the collateral damage wreaked upon the natural world by the self-centered hubris of mediocre men. 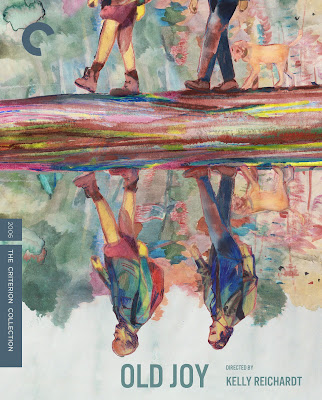 It may not have been her debut feature, but Old Joy stands as the film that made the film world sit up and take notice of Kelly Reichardt. Her sophomore feature, a simple tale of two friends whose seemingly innocuous journey into the woods becomes something almost spiritual, is a buddy movie unlike any other, a kind of meditative reflection on masculinity, aging, and male friendship that feels at once familiar and bracingly new.

Mark (Daniel London) is in his early thirties and about to become a father. Kurt (Will Oldham) is a former college friend who seems perpetually stuck in adolescence. Together they face the growing ennui of the increasing responsibilities of an adulthood that doesn't look quite like either imagined, sharing drug-induced philosophies and memories of a world that is rapidly changing around them. Reichardt deftly explores the intimacy of male friendship, always teetering on the edge of homoeroticism but never quite moving past suggestion an innuendo. But in the end any sexual aspect that comes from their nude hot spring destination seems beside the point. Old Joy is a film as much about embracing the past as it is about encountering the future, very much a part of the growing liberal despair of George Bush's second term (liberal talk radio dominates the soundtrack along with Yo La Tengo's wistful score), of lost men trying to find their way in a world that no longer seems black and white, and any thoughts of change seems lost in complacent inaction.

It's a deeply beautiful work, a film of simple truths and revelations filmed in 16mm film that almost feels like home movies recorded by the characters themselves, inviting the audience along on their journey of self discovery as its simple pleasures wash over us like the warm waters of a hot spring bath. 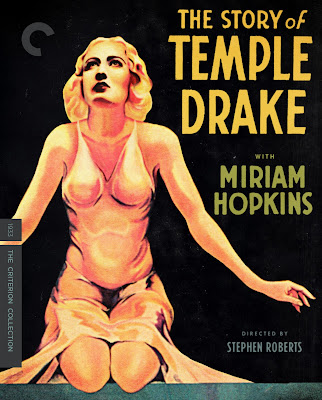 THE STORY OF TEMPLE DRAKE (Criterion)

Sometimes credited as being the film that inspired the full enforcement of the Production Code the following year, Stephen Roberts' The Story of Temple Drake certainly billed itself as a sordid tale of sex and infidelity designed to shock filmgoing audiences of 1933. And yet it's a far more sensitive tale than its sensational marketing would suggest.

Buoyed by a dynamic performance by Miriam Hopkins in the title role, The Story of Temple Drake centers around a woman with a reputation for being, well, a bit loose. She's also the daughter of a prominent judge, and her bad-girl reputation is well known among all the young men in town. She catches the eye of a handsome young lawyer, but insists to him that she's no good and that he should set his sights on someone else. But after she absconds from a party with another young man in search of booze, she finds herself something of a prisoner in a den of moonshiners, and at the center of a murder trial that will force her to make confessions that could totally destroy her already damaged reputation.

The film deals frankly with themes of sexual assault and rape in ways that few films of the era ever did. It was made with the full knowledge of how society at large felt about “girls like her,” and those stereotypes of the “loose woman” are consistently interrogated and subverted. There are two Temples, Temple the person and Temple the legend whose reputation seems to be on everyone’s lips whether they know her or not. While the film's sexual politics are very much rooted in the Depression-era, it's surprisingly subserve in the way it undercuts the expected tropes. Much of this is due to Hopkins' luminous performance as Temple Drake. Roberts often films in close-up, the backgrounds fading into blackness, allowing the audience to focus on the emotions playing out across the actors' faces. The inky blacks and stark whites bely the film's sense of moral ambiguity, and are beautifully restored on Criterion's new Blu-Ray release. 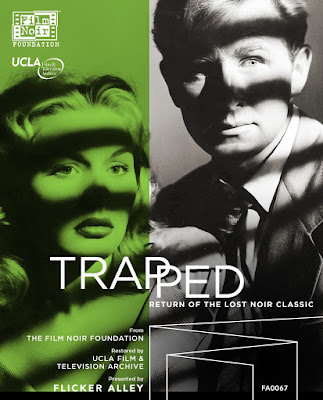 Long lost to substandard public domain transfers, Richard Fleischer's lurid 1949 film noir, Trapped, has been resurrected by the Film Noir Foundation and the UCLA Film and Television Archive, and it is a doozy.

Lloyd Bridges stars as a hardened counterfeiter who is released from jail after new bills made from his old plates start circulating again in hopes that he will lead the feds to the man responsible. Instead he sets out for revenge so he can get back his plates and head out of the country with his girlfriend, a bar girl named moll named Meg (Barbara Payton). What he doesn't realize is that one of the Meg's most generous regular customers is actually a Fed, and he has his eyes set on both of them, leading to a series of double crosses and violent intrigue.

This thing goes to some very dark places, especially from 1949 at the height of the Production Code. Of course everyone gets their comeuppance in the end (with a clearly re-written ending to account for Lloyd Bridges' absence due to illness near the end of the production), but no one gets away clean here. It may have been a Poverty Row potboiler, but Fleischer (who went on to direct major films like Tora! Tora! Tora!, Soylent Green, and Conan the Barbarian) takes a lot of narrative chances by building the film around a cast of almost entirely unlikable and unscrupulous characters, and it pays off. There are no good people to be found here, and in the amoral world of Trapped everyone's debt comes due.