The critical drubbing and box office failure of Richard Linklater's Where'd You Go, Bernadette is one of 2019's biggest cinematic mysteries. It is, perhaps, Linklater's most accessible film, often threatening to become his most overtly conventional, and yet there is something about it that is elusive and difficult to pin down, a kind of restless quality that makes it both deeply pleasurable and consistently engaging. 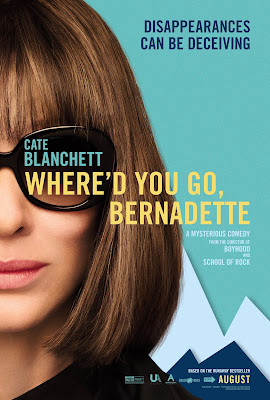 Of course, much of this could be attributed to the typically brilliant performance of Cate Blanchett in the lead role. Her Bernadette Fox is a thing of neurotic beauty, a close cousin of her Oscar winning performance in Woody Allen's Blue Jasmine and yet somehow fiercely its own unique animal. She gives the film a nervous, prickly energy as an anti-social architect whose perceived failures have put her in something akin to self-imposed reclusion, focusing on her family and refusing to design anything for nearly 20 years.

She gets into petty squabbles with her bourgeois neighbors, relies on online virtual assistance for most personal tasks, and does everything in her power to avoid human contact. All the while her family is preparing to go on a trip to Antarctica at the behest of their daughter, Bee (the preternaturally wise young actor Emma Nelson in her film debut), that Bernadette is desperately trying to get out of. Her husband Elgie (Billy Crudup) becomes worried about her, seeing her emotional distance as signs of depression and her jar full of pills as a sign of suicidal thoughts. So he stages an intervention in an attempt to get her "help," causing her to run away in order to find herself again.

As it turns out, Bernadette is not depressed, nor is she suicidal. Their marriage was drifting, and the jar of pills was something of an art project. It is their lack of communication that is the issue, not  to mention the fact that Bernadette hasn't had a creative outlet it nearly two decades. While the characters are dangerously high concept for a Linklater film, who tends to ground his own characters in more solid emotional reality, Linklater handles them with great care, turning them into living, breathing human beings. Where'd You Go, Bernadette feels like an exaggerated form of reality deeply rooted in real human emotion, guided by a keen sense of what it feels like to be someone with a low tolerance for bullshit and a general aversion to societal interactions. I felt this film in my bones, and while it's broader than the usual Linklater, it still has that trademark raw emotional honesty that was so incisive in films like Boyhood and the Before Trilogy.

Linklater paints in bold strokes here, but what may appear to be a self-consciously quirky comedy populated with larger than life characters has much more going on beneath the surface than it's being given credit for. It's a nervy, restless film that never asks us to pity its protagonist, it asks us to understand her. Even as Linklater plays it safe through occasionally on-the-nose narration, every note of this thing rings true, often as painfully honest as it is achingly funny.