After many tries and many films, I've come to the conclusion that I just don't connect with the films of Rainer Werner Fassbinder. While I respect him as an artist and his technique is often impressive, they are, to borrow a line from Whiplash, not my tempo. 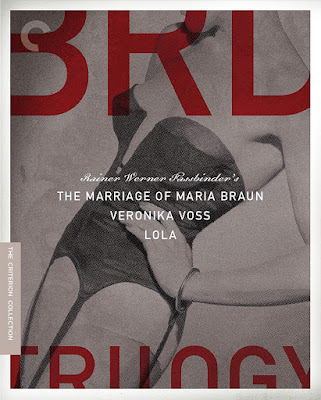 The BRD Trilogy (which stands for Bundesrepublik Deutschland, the official name of West Germany after WWII), a series of films that came near the end of Fassbinder's short-lived but prolific career, represented his biggest financial success, with The Marriage of Maria Braun (1979) becoming his biggest worldwide box office hit, and Veronika Voss (1982) garnering the coveted Golden Bear at the Berlin Film Festival. This loosely connected triptych tackled Germany's much ballyhooed post-war "economic miracle" of the 1950s through the perspective of three women, with a decidedly critical eye.

Fassbinder makes films that are easy to respect but harder to love, consistently holding the audience at arm's length in favor of immaculately crafted, somewhat arch allegorical exercises that are extremely specific to their time and place. All three films in the BRD Trilogy certainly work as standalone melodramas, but their political underpinnings are somewhat muddled. Take The Marriage of Maria Braun for example - does the film have the same impact if you don't know that the parade of black and white negatives at the end of the film are German politicians whose legacy Fassbinder is actively questioning?

Yes and no. Of the three films in the trilogy, The Marriage of Maria Braun represents Fassbinder at his most fiery, carefully crafting the story of a woman whose marriage to a German officer only lasts a day before he goes missing in the war. After years of searching for him, she eventually gives him up for dead, and marries an American GI instead (who appears in all three films, really their only non-thematic connection), only for her husband to return and murder the American. Yet the men ultimately matter very little here - the film is about a woman surviving in a man's world, trying to carve out a place for herself in post-war Germany and put the past behind her. But the past has a way of catching up to you, as Maria Braun eventually learns the hard way. She is a woman in a man's world, and the men always seem to spell doom, their machinations and assumed societal positions always derailing Maria's best laid plans. Made in the style of a Hollywood melodrama but with a deeply cynical edge, The Marriage of Maria Braun takes no prisoners, yet it is very specifically of its time and place, a deep dive into West German politics that don't always translate beyond the culture that gave birth to it. It's the film's feminist edge that remains powerful, and it's easy to see why it became Fassbinder's biggest box office success.


Less overtly political is the trilogy's second entry, Veronika Voss. Chronologically the film was released third (in a George Lucas-like move that doesn't really make sense), and was the last film Fassbinder fully completed before his death in 1982 at the age of 37. Inspired by the life of German actress Sybille Schmitz, who starred in such films as Carl Dreyer's Vampyr before going on to act in Nazi films like Titanic during WWII. Schmitz died in 1955 under mysterious circumstances, resulting in a murder trial of her doctor, Ursula Moritz. Renamed Veronika Voss for purposes of fictionalization, Schmitz's story is reimagined as a kind of German Sunset Boulevard, in which an aging film star is held hostage by an unscrupulous psychologist who bleeds her patients dry and keeps them sedated through unnecessary prescriptions.

Voss is shot in dazzling black and white, where the lights sparkle in the frame like the jewels that down Veronika's neck. It has the look and feel of an old Hollywood melodrama, something Fassbinder was clearly trying to emulate with each film of the BRD Trilogy. Here he explores themes of national amnesia, and Germany's eagerness to put its unpleasant past behind it without truly reckoning with it. Voss both represents Germany's glory days of the Weimar Republic before the rise of Hitler, and of the darkness of the Third Reich, and how easily one slid into the other. Yet one thing that plagues Veronika Voss, and BRD 3 Lola as well, is in how it recalls previous films in a weaker form. It doesn't have the powerful moral outrage of Maria Braun to help it stick the landing, leaving a pretty but mostly empty aftertaste.


That brings us to Lola (1981). Ostensibly an unauthorized (and therefore unofficial) remake of Josef von Sternberg's The Blue Angel (1930) shot in the bright candy colors of a Jacques Demy musical, Lola is the story of a cabaret singer/prostitute who is pursued by two men, an unscrupulous businessman and a buttoned up bachelor who moves to town as the new building commissioner. The film comes to a much different, much less overtly tragic conclusion than von Sternberg's original, yet it manages to leave more unsettling question marks about the future, the apparently happy ending nagged by a sense of the continuation of the status quo. It's a deeply cynical film, disillusioned at the direction of Germany. I'll leave the details of the origins and ramifications of the "economic miracle" to historians more well versed in German politics than I, but Fassbinder's films display a profound sense of ennui about the corruption that continued to permeate every aspect of the culture, undercutting any real moral progress in a country still reeling from the devastation wrought by the Third Reich and WWII.

Yet Barbara Sukowaas' Lola is no Marlene Dietrich, nor for that matter is Armin Mueller-Stahl as powerful as Emil Jannings in his performance as the guileless von Bohm. The film is permeated by rapturous pastel colors, Von Bohm shaded in deep blue hues while Lola is coded in vibrant pinks, but despite its emulation of classical Hollywood Technicolor, Lola, much like the other films in the trilogy, is often insular and cold, holding the audience at arms length like some sort of exercise in cinematic academics than the political allegory dressed up as a lush Hollywood melodrama it tries to be. Fassbinder's political allusions are often too opaque for their own good, and Lola especially feels like an exercise more than a film in its own right.

Criterion's Blu-Ray treatment of the BRD Trilogy is nevertheless stunning. The transfers are uniformly glorious, but especially in the Trilogy's two most visually beautiful films, Veronika Voss and Lola. Each comes with extensive special features and a comprehensive booklet detailing the making of each film as well as a consideration of the trilogy as a whole from Kent Jones. The films are undeniably impressive achievements in their own right, but your mileage may vary depending on your tolerance for Fassbinder's occasionally arch political experiments.