For a film with such a high pedigree, After the Wedding is a shockingly listless affair. Based on an Oscar nominated Danish film from acclaimed filmmaker Susanne Bier and starring Julianne Moore and Michelle Williams, this 2019 Sundance Film Festival opening selection has fallen flat upon release, failing to make the critical splash I'm sure its filmmakers were hoping for. 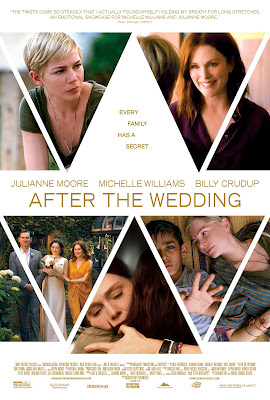 All the elements of a fall prestige picture are there - prime festival opening, star power, and acclaimed source material, and yet everything about After the Wedding feels bland and perfunctory, a remake of a foreign language film that never really justifies its own existence. Williams stars as Isabel, an American woman who manages an orphanage in India, who finds herself called to New York to advocate for sponsorship from a potential donor. The donor is Theresa (Moore), whose husband Oscar (Billy Crudup) is actually the father of Isabel's child, a child Isabel thought she gave up for adoption years ago. But Oscar kept the child, and now she's getting married just as Isabel arrives in America. Isabel is taken aback to be confronted with her long lost daughter, but things become more complicated as the reasons for Theresa's become clear, throwing the entire family into turmoil.

After the Wedding weaves a tangled web, but it never rises about the level of a glossy soap opera. It's handsome to look at, and Williams and Moore are in typically fine form, but this thing is a slog, a ponderous, self-important "prestige" drama whose overwrought histrionics never approach anything resembling actual human emotion. Director Bart Freundlich, whose previous credits include The Rebound and Catch that Kid, seems determined to transition to higher class dramas by milking every ounce of feeling out of the material that he can, and the result is often exhausting, a hopeless mishmash of art house clichés and prestige picture banality.

It's a shame because the pedigree is certainly there, but the film seems designed from the ground up to be an awards contender, hopelessly wringing the life out of every story beat and emotional moment. Freundlich's penchant for cutting to sweeping drone shots belies the film's intimate nature, ultimately creating a film of strong ambitions but a weak emotional center. It never manages to stand out from the hundreds of films like it that have clogged film festivals and art houses this time of year for decades, and it is likely that it will be forgotten nearly as quickly as its predecessors, lost in the late summer "adult drama" doldrums that have become a sort of Bermuda Triangle for films of this earnest but tedious ilk.