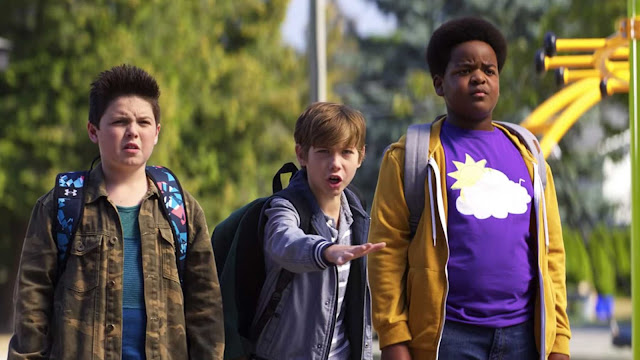 The premise of Good Boys is essentially built around one joke - three 6th grade boys are invited to a "kissing party" and keep finding themselves in raunchy adult situations that they don't understand. It's basically Superbad in middle school, with our young heroes desperately trying to learn how to kiss with the belief that this party will dictate the direction of the rest of their lives. Along the way they encounter drugs, sex toys, and bullies in an ever-increasing series of outlandish situations that will put their friendship to the test. 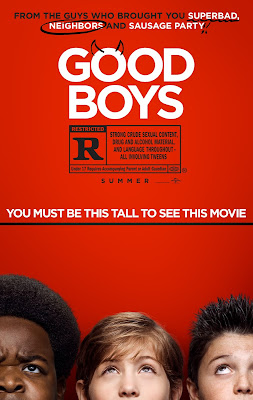 It's a tricky line to walk, throwing so much decidedly R-rated material into a film starring 12 year olds ("we're not kids, we're tweens!" they often remind us), yet director Gene Stupnitsky handles it with surprising care. Their innocence and obliviousness to what's actually going on around them is the film's key joke, and while it threatens to wear somewhat thin by the end, Stupnitsky has the wherewithal to transform the film into something a little more heartfelt.

That it never overstays its welcome is a testament to the three young leads; Jacob Tremblay, Keith L. Williams, and Brady Noon. They carry the film with a certain sense of naiveté, as if they're not in on any of the jokes and the film is just happening around them. They cuss with wild abandon, encounter drugs and sex toys, and find themselves in outlandish situations that children should never be in. Yet throughout all Good Boys remains disarmingly sweet, never letting its raunchy humor drown out the sense of coming-of-age nostalgia that permeates its core. Beneath the R-rated humor, it's a film about the ephemeral nature of childhood friendships, how the things that hold us together when we're children aren't necessarily the things that hold us together when we're adults. It may have a juvenile sense of humor, but like Superbad before it, it manages to use that humor in service of a more human element.

While Good Boys doesn't exactly feel like a comedy classic in the making the way Superbad did, it's got a lot of heart and plenty of laughs thanks to the talent of its young cast. It has one central joke, but it executes it well, bringing its grown up audience in on the joke with a wink and a smile. It's the kind of film whose humor is instantly relatable for adults, reminding us all of our childhood desire to grow up too quickly, while mining great humor out of how young and dumb we all really were.

Good Boys puts a new twist on the familiar trappings of the teen sex comedy, and while much of it feels awfully familiar, Tremblay, Williams, and Noon carry the film with great conviction, breathing new life into a venerable genre that hasn't quite run out of gas just yet.