On July 12, 1917, a group of over 1,200 copper miners comprised mainly of Mexican migrants were forcibly deported on trains and left to die in the middle of the desert outside of Bisbee, Arizona. The event, which became known as the Bisbee Deportation, has largely been forgotten by history, a fragment of the region's fraught past many would rather leave forgotten.

The deportation was the result of a general strike imposed by the miners' union and encouraged by the Industrial Workers of the World, a "radical" group of labor organizers with known Communist sympathies. They saw the labor dispute in the Copper Queen Mines in Bisbee as a way to disrupt the American war efforts during World War I, and stepped in on the workers' behalf. Rather than negotiate with the workers, the town, essentially under the control of corporate interests, rounded up the miners, tried them in kangaroo courts, and illegally deported them, an act of attempted genocide that went unanswered and un-prosecuted. 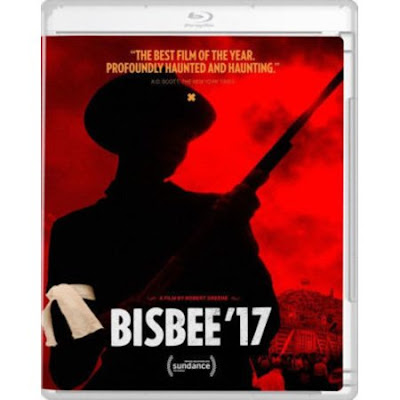 It's a tragedy that still hangs over the town of Bisbee like a dark cloud, and every year the town gathers together to commemorate the event, many locals claiming ancestry on both sides of the conflict. Robert Greene's haunting documentary, Bisbee '17, chronicles the town's commemoration of the 100th anniversary of the deportation. As the town gathers to recreate the event, Greene also stages his own recreation of the event, allowing members of the town to reckon with the demons of their past and comes to terms with the crimes committed by their ancestors in their name.

Bisbee '17 is a fierce and timely work, haunted by the sins of America's past that echo the atrocities of its present. Greene interviews many town residents who continue to stand by the actions taken by their ancestors, offering up half-baked excuses about "fighting Communism" and "standing up for America," when the mine that gave their town life now sets abandoned, all but destroying Bisbee and leaving its citizens mostly destitute. One has to wonder what capitalism has brought them but pain, even as they hope for the mining company to return and save them while they rail against the evils of communism from the dusty streets of a ghost town ravaged by corporate greed. And yet, much like Joshua Oppenheimer's The Act of Killing, the townspeople soon find themselves in an unexpected position as they recreate the infamous deportation and watch it unfold with their own eyes. Seeing the events through new eyes may not change how they feel, but one can feel a subtle shift in the town of Bisbee, a growing unease with their past that reflects the growing unrest of America at large, a country wrestling with its sins yet seemingly unable to acknowledge its faults, content in its own unearned sense of exceptionalism.

Yet the film's emotional core is Fernando Serrano, a young gay hispanic man whose embodiment of the plight of his ancestors may just be his political awakening, reframing his perspective of his own place in the world. As the white people around him continue to make excuses for the actions of their ancestors ("it was a different time," "they did what they had to do") Serrano begins to realize that his friends and neighbors may not really be on his side. It's a stunning and heartbreaking blend of performance and reality that blurs the line not only between actor and role but between the past and the present, creating a unshakable link from our present climate to the atrocities of our past that we have yet to atone for. One can't help but wonder as Bisbee '17 reflects on the actions of the citizens of Bisbee in 1917 how history will one day judge the America of 2019.


BISBEE '17 | Directed by Robert Greene | Not Rated | Now available on Blu-Ray and DVD from Grasshopper Film.