The end of summer tends to be a bit of a box office doldrum. The blockbusters have all been released (and promptly forgotten), the kids have gone back to school, and Oscar season is still on the horizon. Movies released in late August and especially September are often slim pickings. 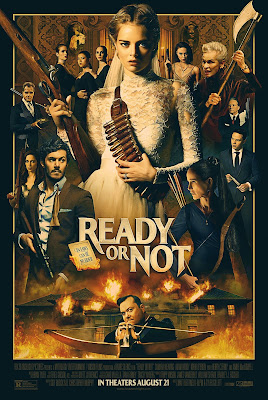 This year, interestingly enough, has been a bit different. After a summer filled with remakes and sequels, the end of August has provided us with a few wide release gems. The latest is Ready or Not, a horror comedy from Matt Bettinelli-Olpin and Tyler Gillett, who are perhaps best known for directing 10/31/98, the final segment from the V/H/S anthology. The film centers around a young woman named Grace (Samara Weaving), who is marrying Alex Le Domas, the youngest son of a wealthy family who made their fortune through an expansive board game empire. The in-laws are eccentric to say the least, and invite Grace to participate in a wedding night ritual in which the newest member must play a game with the entire family. Little does she know that this game is a deadly version of hide and seek, in which she is to be hunted down like an animal and sacrificed to appease a deal with the devil that the family made long ago in order to amass their fortune.

A devious new twist on Richard Connell's The Most Dangerous Game, Ready or Not pits Grace against a kooky cast of characters armed with an eclectic set of weapons, from old-fashioned pistols, axes, and crossbows. But Grace is determined not to go quietly, and after the initial shock wears off, sets out to fight back in any way she can. It's a delightfully demented comic romp, short, sweet, and nasty - a gleeful fantasia of over-the-top gore and outlandish action that takes direct aim at the exploitation of the poor by the wealthy. For most of the film, the only ones who suffer any consequences for the Le Domas' bloodthirsty ways are their employees, the working stiffs they pay to do their dirty work for them.  Their fortune is built on the backs those they've exploited, crafting a metaphorical (or maybe literal) deal with the devil in order to preserve their wealth and status.

Bettinelli-Olpin and Gillett are somewhat inexperienced painting on a canvas this large, and it shows occasionally in the film's sometimes stiff performances. But newcomer Weaving, who bears a striking resemblance to Margot Robie in both appearance and acting style, is a fiercely enjoyable lead, and the broad performances of the supporting cast add to the exaggerated absurdity of it all. The film almost recalls the Universal horror films of the 1930s, with its expansive gothic mansion setting and offbeat characters that come off as caricatures of old money vultures. It's something of a breath of fresh air after a summer that has mostly given us things we've already seen before. Ready or Not is a wild ride, a joyfully mean-spirited horror comedy that takes no prisoners and ends up delivering one of the most purely satisfying endings of the year.