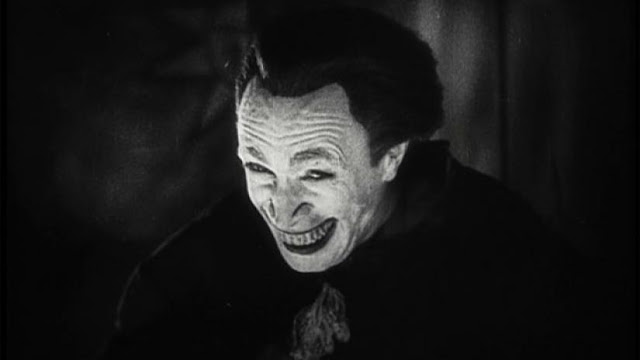 In the late 1920s, Universal was known more as a scrappy B-movie studio rather than a major Hollywood player.

In order to bolster its reputation, studio head Carl Laemmle ordered the production of what became known as "jewels," prestige productions designed to compete with major players like MGM and Paramount who had their own theater chains. Laemmle pulled out all the stops for the jewels, providing massive budgets that would prove to the world that Universal wasn't just a producer of cheap westerns aimed at small town audiences. Two such jewels were The Phantom of the Opera (1925) and "super-jewel" The Hunchback of Notre Dame (1923), were monster successes, buoyed by the star power of Lon Chaney and Laemmle's determination to spare no expense. 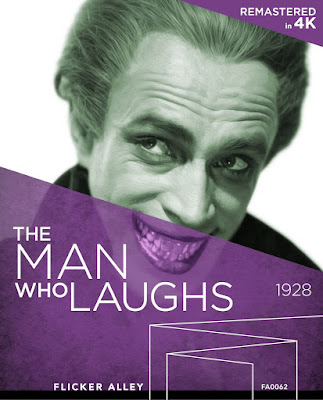 Laemmle was not only a shrewd producer, he also had a sharp eye for talent, and imported many great filmmakers from Europe to come from America and work for Universal. One of the greatest (and most unheralded) was Paul Leni, whose biggest success in Germany, Waxworks (1923), had displayed a keen eye for horror. When Laemmle wanted to make another film that could compete with the success of Phantom of the Opera he turned to Leni, and returned once more to a story of disfigurement with an adaptation of Victory Hugo's The Man Who Laughs (1928).

With Chaney now under contract at MGM, Leni turned to Conrad Veidt, who had also starred in Waxworks but was perhaps best known as the somnambulist Cesare in The Cabinet of Dr. Caligari (1920). Veidt was no stranger to playing grotesque characters, and The Man Who Laughs is a tale of ghastly disfigurement that features a dark and tragic heart. Veidt stars. as Gwynplaine, a circus performer whose face was cut into a ghoulish grin by transient bandits when he was only a child. Now relegated to a side-show carnival act, Gwynplaine falls in love with Dea (Mary Philbin), a blind girl who is also a member of the circus and does not know he is disfigured. But when one stop in a particular small town runs them afoul of the mad doctor who carved the grin into his face, the circus runs afoul of a vengeful vizier to Queen Anne, and the truth about Gwynplaine's past is revealed - he is the heir to the titles and fortune of his wealthy father who was executed for treason by King James, and in order to retain them he must join the House of Lords and marry Duchess Josiana (Olga Baclanova) or face the wrath of the queen.

Leni brought a German Expressionist sensibility to the production, with its elongated shadows and off-kilter sets, quite remarkable for a Hollywood production. Veidt's eerily grinning visage would go on to provide inspiration for the character of the Batman's arch-nemesis, the Joker, yet the character of Gwynplaine, like Quasimodo before him, is not a villainous one. Veidt is the beating heart of The Man Who Laughs, anchoring its grotesqueries in a sense of tragedy and pathos. The film has been given a stunning 4K restoration as part of Universal's ongoing effort to preserve its extensive back catalogue, and as a result the Blu-Ray transfer by Flicker Alley is nearly pristine, featuring an image free from the dirt and damage that often marks films from this era. 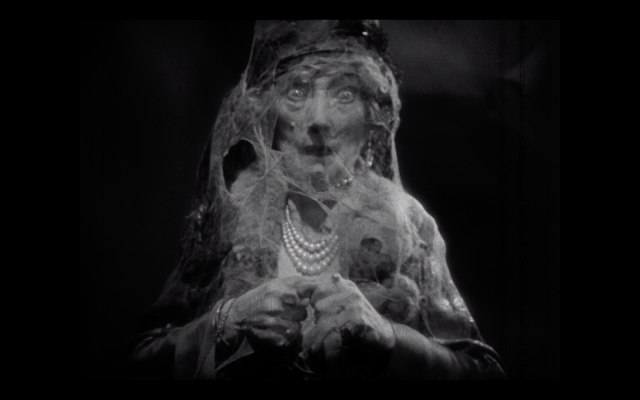 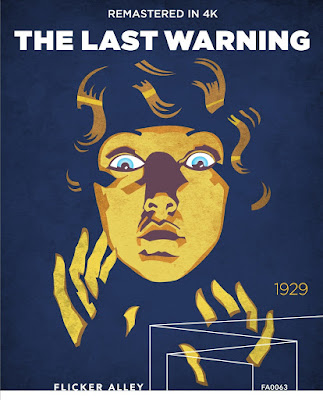 A prototypical haunted house mystery, The Last Warning centers around a murder in a Broadway theater in front of a packed house. Years later, a producer gathers the cast and crew together to recreate the circumstances of the murder for a live audience, but the dead man's ghost seems determined that the show must not go on.

Leni once again makes great use of light and shadow, but it's the way he moves his camera that reveals his unheralded mastery of the medium. In one especially stunning shot, a man walks all the way across the room right up to the camera, which then focuses in on the flower he’s carrying in his hand. In another just after the murder, the director orders the curtain to come down, and the camera ducks under the falling curtain to follow him out into the audience. Leni is clearly having fun here, and it's a tragic loss to cinema that his talent was cut short at the age of 44 the same year that The Last Warning was released.

There's just something about its unpretentious spookiness and its self-aware sense of humor that is tremendously satisfying, showcasing Leni as a master showman. He even manages to outdo fellow German F.W. Murnau, whose similarly themed The Haunted Castle (1921) was nearly done-in by its dreary self-seriousness. While much of the attention would be placed on The Man Who Laughs, this is the true jewel in Leni's crown, a deliriously entertaining mystery filled with eerie shadows, kooky characters, and outlandish twists that always land through Leni's sharp balance between humor and horror. The Last Warning is one of the last great Hollywood films of the silent era and stands ripe for rediscovery.


The Man Who Laughs and The Last Warning are now available on Blu-Ray and DVD from Flicker Alley.