For those of us who grew up with Alvin Schwartz's series of books, "Scary Stories to Tell in the Dark," the eerily simple campfire stories and Stephen Gammell's haunting, spidery illustrations were the stuff of nightmares. They were scarier than "Goosebumps" and featured a collection of urban legends and folk tales that, no matter how silly at their core, seemed frighteningly plausible. 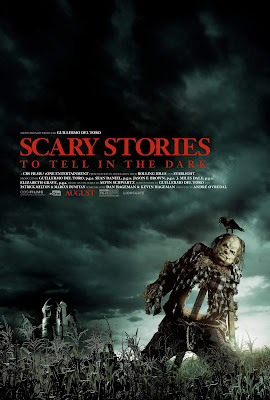 The prospect of translating those stories to film seemed like a dubious venture - after all it was the ethereal scrawl of Gammell's illustrations that made the stories so singularly terrifying. Yet director André Øvredal, working from an original story by producer Guillermo Del Toro, achieves something quite remarkable - a film that not only pays chilling homage to the indelible imagery of its source material, while charting a new course uniquely its own.

Rather than directly adapt the stories, Scary Stories to Tell in the Dark takes a page from the Goosebumps films and folds them into a separate narrative altogether, sprinkling some of its most famous tales into a story designed to bring them all together. Set in the late 1960s, the film centers around a group of teenagers who accidentally summon a vengeful spirit from a local haunted house around which ghost stories have swirled for decades. The legend says that the ghost of a young woman named Sarah Bellows would whisper scary stories to children through the walls of the house, but anyone who heard them would soon disappear. When the teens discover Sarah's book of scary stories in the house's gloomy basement, they soon discover that the legend is true, and the stories in the book are coming to life, leaving them on a race against time to find a way to stop the horrifying monsters that spring from its pages and put Sarah Bellows to rest once and for all.

The creatures are memorably rendered, often through practical effects, retaining their grotesque visages and never overplayed to the point that their lose their effectiveness. But what makes Scary Stories to Tell in the Dark so fascinating is that it parallels its tales of terror with an actual American horror story - the Vietnam war and the election of Richard Nixon. Nixon's election casts a dark shadow over the film like a real-life boogeyman, and the film boldly shifts the thematic focus of the film away from the fictional monsters that go bump in the night and toward to real villain - capitalism. Sarah Bellows, it turns out, was a victim of her wealthy family's plot to cover up the fact that their paper mill was poisoning the town's water supply with mercury, killing countless children and giving birth to the dark rumors that surrounded their family for generations. In Scary Stories to Tell in the Dark these stories have real power, to hurt or to heal, and the only way to heal the trauma of the past as a nation is to confront it head-on and tell the truth about the sins of our ancestors. In order to save ourselves and write a new story, we have to acknowledge the darkness in our history, whether it be the destructive greed of capitalism or the evil specter of racism.

It's a deeply powerful theme for a film about walking scarecrows and corpses searching for their missing toes, but not only does Øvredal capture the primal spookiness of the books, with their campfire-ready things that go bump in the night, he also taps into the raw nerve of our own national conversation, and its insistence on venerating the past while ignoring its darker, more inconvenient elements. It knows that history is the scariest story of all, and it boldly places the ball in the audience's court to go out and write a new one. Øvredal turns the film's creepy funhouse aesthetic into a surprisingly adept commentary on our national obsession with clinging to false narratives about our past, choosing not to comfort us with nostalgic memories of days gone by, but to throw back the curtain on their most terrifying monsters.