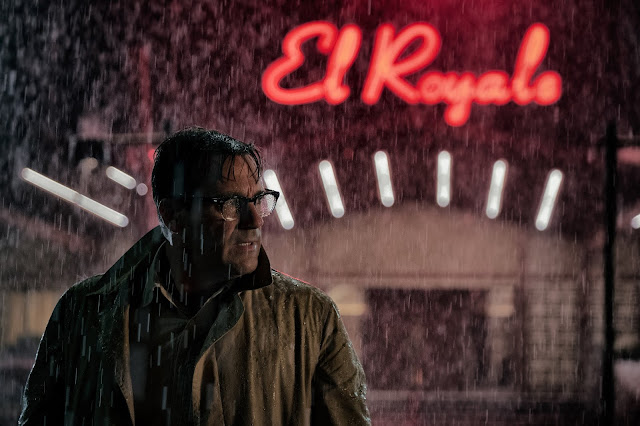 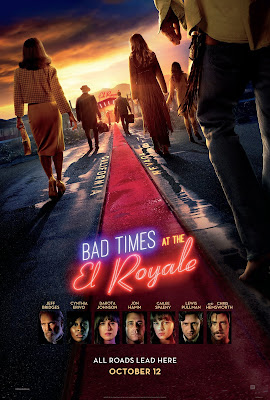 Set in a once glamorous hotel on the border between California and Nevada, Bad Times at the El Royale finds a cast of disparate characters, each with their own secrets, converging in a perfect storm of bad decisions and illegal activity. There's a priest (Jeff Bridges) whose motives may not be as pure as they appear; a singer (Cynthia Erivo) whose experiences lead her not to trust anyone; an FBI agent (Jon Hamm) who's deep undercover; and a hippie (Dakota Johnson) with a very complicated past.

Each one of their pasts will catch up with them on their night in the El Royale, and Goddard (who also wrote the screenplay) juggles it all with a sharp sense of visual wit and narrative flair. While the film feels a bit bloated at 142 minutes, the characters he creates are so memorable and the milieu so compelling that it's hard not to become invested in the story. The real strength here is Goddard's screenplay - while it may leave a lot of loose threads, it's so well-written that it almost feels like it would make a better play than a film. These characters and their outlandish situations are almost begging for the stage treatment. Whether they're looking for money, sex, absolution, or simply to be left alone, their bad decisions all have consequences that finally get the best of them in one way or another.

If at times it feels a bit like Tarantino-lite (there are shades of The Hateful Eight here), it's because Goddard borrows from many of the same references. Tarantino, of course, bases most of his films on his own cinematic favorites, and Goddard is no different, taking everything from film noir to Agatha Christie to Akira Kurosawa's Rashomon and turning it into a neon-lit mystery that feels thoroughly modern.

Goddard's storytelling sensibilities are top notch, even when the film begins to feel too long; his instinct for just how much information to reveal (and how much to keep in the dark) is remarkably sharp, and the result is an engaging thriller whose characters make the overlong film worth the ride.  Add to that some evocative cinematography by the great Seamus McGarvey and a disarmingly emotional score by Michael Giacchino, and you have a winning formula that overcomes most of its faults to provide a compelling and thoroughly entertaining yarn.