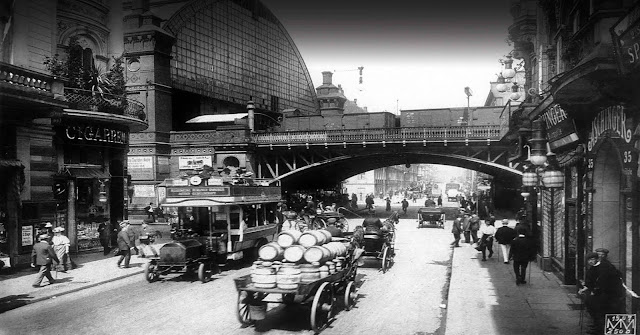 Walther Ruttmann's Berlin: Symphony of a Great City (1927) was something of a reaction to the heavily stylized German Expressionist movement that was such a major influence on German cinema in the 1920s. Carl Mayer (The Last Laugh), drawing inspiration from the Kammerspiel movement, which took a more naturalistic look at lower-middle class German life, conceived a "melody of pictures" that would pay tribute to the daily life in the city. 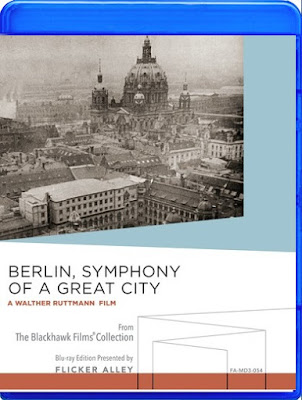 While the Kammerspiel movement was short-lived, its adherents included the likes of F.W. Murnau and G.W. Pabst. Mayer's vision was something else entirely, a kind of documentary that would strive for the ultimate in realism - portraying real life in Weimar-era Berlin. These "city symphonies" were not a new concept (Paul Strand and Charles Sheeler's Manhatta predates it by about six years), but Berlin: Symphony of a Great City  actually predates, and in many ways presages, Dziga Vertov's seminal avant-garde documentary, Man with a Movie Camera (1929, also available from Flicker Alley).

Berlin: Symphony of a Great City rushes us into the heart of Germany's capital on a train, its rhythmic editing suggesting not only the speed of the locomotive, but the fast-paced heartbeat of the city itself. Ruttmann focuses mainly on the city's industrial elements rather than its people, emphasizing technical progress and economic might over personal storytelling. But there's something so joyous, so rapturous, so glowing about its celebration of national achievement (one can't help but be reminded of the ecstatic milk separator sequence from Sergei Eisenstein's Old and New). It provides a fascinating glimpse into life in Weimar-era Germany, one made even more poignant and chilling by the knowledge of what happened after. The subsequent rise of Hitler and the downfall of liberal democracy in Germany casts a haunting pall over Ruttmann's film in retrospect. The Germany we see here is progressive, forward thinking, a shining beacon for industrial and cultural innovation. It would not last.

Despite Mayer's vision of a naturalistic tour through Berlin, Berlin: Symphony of a Great City  is anything but naturalistic in construction - its Soviet-style editing giving the film a more expressionistic feel. Yet rather than be confined to the studio, Ruttmann was set free to explore the world around him. It's a film teeming with life, brimming with the energy of a boisterous and vibrant metropolis. It remains a hugely influential documentary work, one that found dramatic drive through image and montage rather than through talking heads or narration. This is pure cinema, a work of visual rapture that often feels like stepping into a time machine, inviting us into a world long since past. It remains one of the most essential, evocative, and beautifully effective documentaries ever made. While not a regular release from Flicker Alley, this manufactured-on-demand Blu-Ray is a must-have for fans of silent film - what it lacks in special features it makes up for in image quality - the 2K restoration brilliantly capturing its dynamic immediacy.


BERLIN: SYMPHONY OF A GREAT CITY | Directed by Walther Ruttmann | Not Rated | Now available on MOD Blu-Ray and DVD from Flicker Alley.