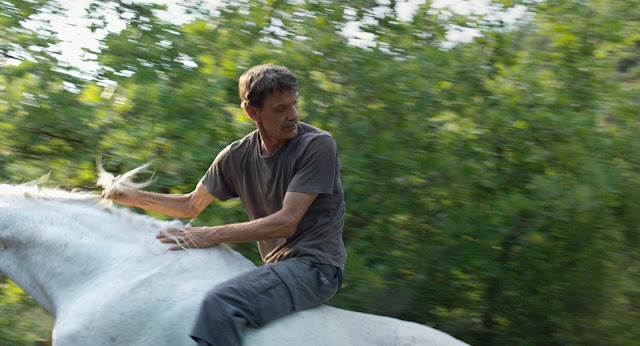 While the western is often regarded as one of the most essentially American of film genres, with its visions of lone gunslingers in white hats riding across the vast expanses of the American west, it often borrowed liberally from other genres (especially Japanese samurai films). No genre without its own influences, and the western is no different. 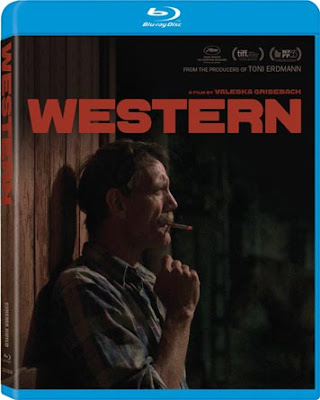 In German filmmaker Valeska Grisebach's Western, the genre is present if not overtly, at least in spirit, repurposing its vision of colonization and racial conflict into modern-day Bulgaria. It's a testament to the pliability of the genre's tropes, as well as the universal sensibility of any genre, that it fits so well here, in this story of German construction workers who have been tasked with building a dam near a rural Bulgarian community on the Greek border.

These would-be colonizers are at once invigorated and empowerd by the rural landscape. Seemingly free from the confines of society as they know it, they soon run afoul of the locals when project foreman, Vincent (Reinhardt Wetrek) gets a little too friendly with a woman attempting to swim in a river near their campsite. Stoic silent-type, Meinhard (Meinhard Neumann), becomes fascinated by the local people. A German veteran of the French Foreign Legion, Meinhard is seemingly a man without a country; a wanderer looking for a place to belong. He is treated with a mix of suspicion and fascination by the Bulgarians, some of whom haven't quite forgotten the scourge of the Nazis from World War II.

The simmering tensions between the German construction workers and the Bulgarians soon threatens to boil over, born of historic mistrust and colonial arrogance. Yet Grisebach flips the genre's formula on its head, never allowing the promised showdown to come to pass. Colonialism in Western is a much more subtle, long-term evil than something so easily settled by a gunfight at the OK Corral.  Her slow-burn direction creates a world where hostility always bubbles just beneath the surface, a kind of cultural alienation belied by the sweeping mountain vistas that pepper the film's landscape like John Ford's beloved Monument Valley locales. Meinhard Neumann's craggy face becomes the perfect, impassive canvas for Grisebach's study of masculinity and its effects on the landscape - brooding, emotionless, a passive observer of a changing world.

Western is a quietly austere inversion of the mythology of the American west that examines its basis in colonialism and cultural annihilation that takes great pleasure in subverting western tropes. It feels organic and lived-in, observational and astute, the kind of slow-burn film that takes some time to settle into, but rewards its viewers' patience in spades. Yet perhaps its most lingering and disquieting idea is that perhaps the western, with its mythical visions of cowboys taming a wild land, wasn't quite as noble and benign as once we imagined; built instead on the celebration of cultural destruction and genocide, transcending cultures and continents, whose effects linger with us still today.