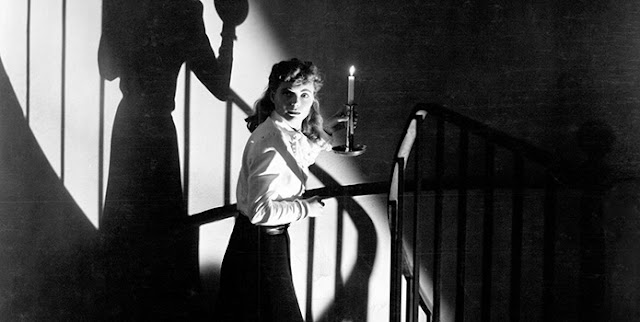 Gothic mansions, stormy nights, darkly lit hallways, and elongated shadows populate Robert Siodmak's 1946 chiller, The Spiral Staircase, a haunted house tale where the ghosts are all too human. Dorothy McGuire stars as Helen, a mute caretaker for the elderly Mrs. Warren (Ethel Barrymore, who received an Academy Award nomination for her performance), whose spooky old mansion hides a multitude of dark secrets, and was once the location of a grisly murder. 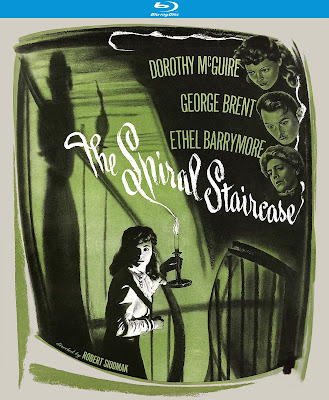 The past soon comes back to haunt them all as the killer has seemingly struck again, strangling a handicapped young woman at a nearby hotel. As family and guests take shelter in the mansion during a raging storm, it soon becomes clear that the killer is among them, and that he has his sights set on Helen in a ghoulish quest to rid the world of perceived imperfections. Helen, unable to speak due to a recent trauma, is left to her own devices to uncover the murderer before she too falls victim to his maniacal ideology.

Released just one year after the end of WWII, The Spiral Staircase gives its serial killer villain a motivation resembling that of the Nazi dream of racial and physical purity by having him prey only on those with  physical handicaps. In a world that had just confronted real evil, nothing supernatural could possibly be as frightening as the horrors of the Holocaust. Siodmak understands this, and the idea that the killer could be anyone, even a friend, takes center stage. The world knew that monsters were real in 1946, and that seemingly normal people could harbor evil ideologies in their hearts without anyone ever knowing it. It's something that makes The Spiral Staircase feel frighteningly timely in 2018; a woman robbed of her voice by past trauma being pursued by a well-respected white man whose hateful worldview drives him to lord his power over society's disadvantaged, seeking to rid the world of those he deems lesser.

This isn't an attempt to lay a modern political worldview on a 70-year-old film, this was very much something being dealt with in society in 1946 as well. The world had stood up to the Nazis and won, and in so doing had learned something very important about the dark side of humanity. Its feminist backbone stands in stark relief when viewed through a modern lens, but the villain is very much the product of a time where innocence had just been shattered and we realized that extreme, prejudicial ideologies were lurking in the hearts of men.

The Spiral Staircase is a spooky, atmospheric film with the heart of a ghost story. But there's nothing supernatural about it. Its horror stems from a very real evil that continues to haunt us today. The new Blu-Ray from Kino Studio Classics beautifully restores its inky black shadows from a stunning 4K scan, giving the film new life at a time where it has suddenly become more relevant than ever. Audiences in 1946 had faced this horror head on, and The Spiral Staircase stands as a stark warning to anyone who may have to face it again.