Near the end of Bradley Cooper's A Star is Born, the fourth version of the oft-told tale, Sam Elliot's Bobby Maine, brother of Bradley Cooper's Jackson Maine, looks at Lady Gaga's newly anointed pop star and tells her that all the songs that have ever been written are comprised of the same 12 notes in different octaves; what makes them unique is how the artist plays them. It's a direct defense why this story, which has been filmed in 1937 with Janet Gaynor, 1954 with Judy Garland, and 1976 with Barbra Streisand, needed to be told yet again in 2018.

The story is, of course, quite familiar at this point. A young woman who dreams of becoming a singer meets a superstar who gives her a big break, only to self-destruct as her rise to stardom mirrors his fall. The first two A Star is Born films chronicled Hollywood stardom, while the most recent two have turned their eyes on the music industry. Enter Lady Gaga as Ally, a waitress who spends her time crooning at a gay bar when she isn't bussing tables. When rock superstar Jackson Maine stumbles into the bar one night looking for a drink, he is instantly smitten with her singing, and invites her out for a whirlwind night on the town. 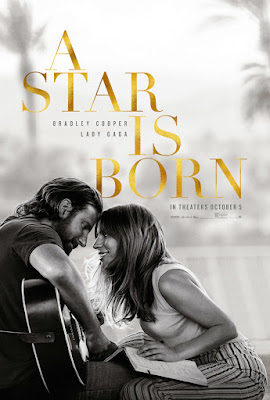 Soon the two become inseparable, and after he invites her onstage at one of his concerts to perform a song she wrote, the performance goes viral and Ally finds herself a star on the rise, racking up Grammy nominations and performing on Saturday Night Live. But as Ally is on her way up, Jackson is on his way down, struggling with alcoholism and a overall sense that the glory days are behind him, a perfect storm that begins to have a detrimental effect on Ally's own fragile career.

Unlike in the previous iterations of A Star is Born, Ally's rise is marked by a kind of selling out. Her music is inauthentic vapid pop that doesn't reflect her own personality as an artist. It's a curious reflection of Gaga's own career, which began with electronic dance more suited for night club dance floors than the soulful pop that has since become her hallmark. Gaga has acted in films before, showing up in small roles in films like campy grindhouse movies like Machete Kills and Sin City: A Dame to Kill For; she even won an Golden Globe for her work on FX's American Horror Story. Nevertheless, her performance in A Star is Born feels like a revelation. The moment when she first steps up to that mic is one of the most breathtaking things we've seen on screen in recent memory, a moment of iconic weight that feels as if we're seeing Lady Gaga for the first time, a star truly being born before our eyes.

For his part, Cooper's direction recalls that of Bob Fosse, emulating Fosse's use of light from Cabaret and his gritty musical aesthetic and emulation of addiction so memorably showcased in All That Jazz. While the film loses some steam by the end, and seems to approach its inevitably tragic climax a bit too quickly, Cooper and Gaga carry it over the finish line on the strength of their chemistry. Gaga's voice is incredible of course, but what's really impressive is how she sells her relationship with Cooper so completely. Cooper explores the destructive nature of addiction (always hinted at in the other films, but never has Maine been so far gone from the get-go) and the high price of fame with a great sense of empathy and narrative grace.

A Star is Born has always been a tragedy at heart, a tale of a phoenix rising from the ashes and overcoming adversity to become the best version of herself. And while it may not quite hit the lofty heights achieved by William A. Wellman's 1937 original or George Cukor's 1954 Technicolor version (arguably the most famous of the lot), it is an overwhelmingly emotional experience whose power is hard to shake. It takes a timeless story and looks at it with fresh eyes, allowing Lady Gaga to reach down deep and touch a raw nerve deep within her soul. It is truly a star-making performance, and despite having a decade of astronomical fame behind her, A Star is Born heralds the arrival of Gaga not just as a singer/songwriter with a penchant for theatrics and wild costumes, but as a fully formed and multi-talented artist who can no longer be discounted as one of the finest talents in a generation.