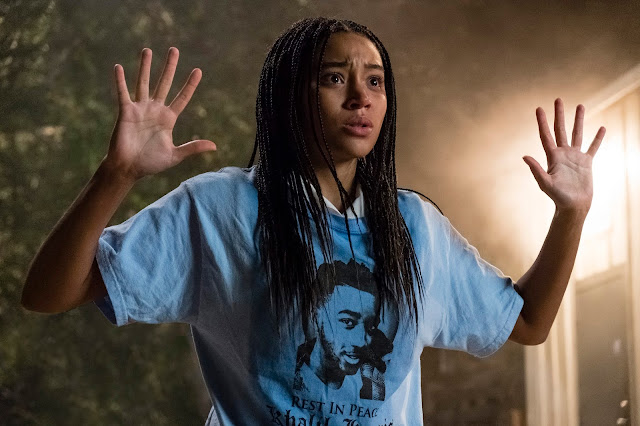 There's something to be said for a film that is able to take complex ideas like systemic racism and white privilege and presents them in a clear, straightforward, and emotionally honest way. George Tillman, Jr.'s The Hate U Give is one such film, a work that grapples with big ideas in easily digestible ways, resulting in a rousing, crowd-pleasing drama about what it's like to be black in America in 2018. 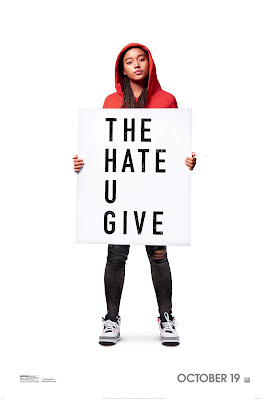 Amandla Stenberg (The Hunger Games) stars as Starr Carter, a black teenager caught between two worlds - the world of her predominantly white, suburban private school, and the world of her hometown, a predominantly black area of town known for its high crime rate and drug abuse. Her parents sent her to the private school as a way to get her away from the influence of drug dealers in her local high school, but she finds herself denying her own identity, pretending to be more "white" in order to fit in.

But when she is the witness to the murder of another black teenager by a white police officer, she begins to seriously question her place in society. Will she speak up and tell the truth about her friend's murder? Or will she stay silent so as not to rock the boat, and be seen by her white friends as a radical from the ghetto?

Police shootings of unarmed black men have become a major cultural issue, especially in recent years. The Hate U Give examines their impact on all involved, how they reverberate through families and neighborhoods and feed into historic mistrust of the police in the black community. Yet perhaps the most remarkable aspect of the film is how it so succinctly articulates ideas of white privilege and racial identity. "I don't see color," Starr's boyfriend, Chris (K.J. Apa), insists at one point. To which Starr replies, "If you don't see my blackness, then you don't see me."

The title comes from a song by Tupac Shakur in which the phrase Thug Life stands for "The Hate You Give Little Infants Fucks Everybody." The idea that the cycle of hate and violence will only continue as long as children are brought up in a world filled with both. While the breaking of that cycle in the film feels a bit too easy, the ideas leading up to that climax are powerfully articulated. Its illustration of racism, and how it often rears its ugly head in the most subtle of ways, is striking in its directness. The damage systemic, institutional racism, upheld by racist power structures and centuries of ingrained white supremacy, has become so normal that it's difficult for white people to recognize their own privilege.

The Hate U Give isn't trying to preach to white people (although it does have a tendency to overstate its themes out loud via voice-over), it's a vital and deeply felt expression of what it means to be black, and why racial identity is so important to historically marginalized groups. It's a topic few mainstream films ever touch, yet Tillman does so with humor and grace, and an unmistakable fire that is hard to shake.