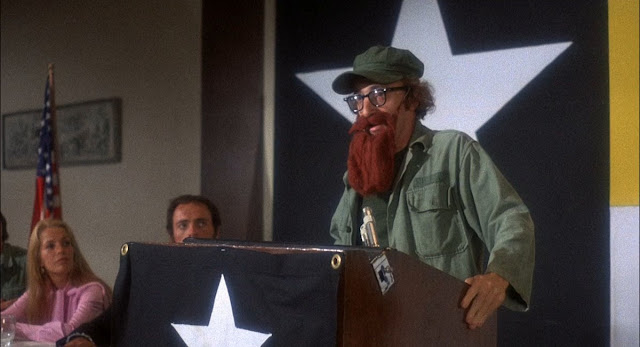 It's always interesting going back and watching Woody Allen's older films, especially those from the pre-Annie Hall era of the early 1970s. They're so full of energy, so vibrant and filled with the unbridled verve of a young filmmaker for whom the world is his playground. It's hard to believe that the staid, overly-safe filmmaker behind Wonder Wheel, Magic in the Moonlight, and To Rome with Love is the same man who once helmed such adventurous and occasionally bonkers films as Bananas (1971), Everything You Always Wanted to Know About Sex* (But Were Afraid to Ask) (1972), and Love and Death (1975). 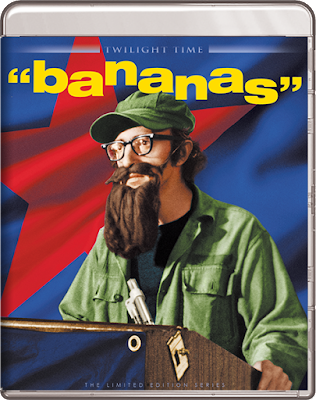 Bananas is perhaps one of Allen's broadest comedies. While he would certainly mature as a filmmaker after Annie Hall and on into the 1980s, there's just something refreshingly unselfconscious about the almost anarchic zaniness present in his early work. He's not trying to emulate Bergman or Fellini, or pay homage to Chekhov, or recreate German Expressionism, or infuse his script with philosophical musings (although he does namedrop Kierkegaard), he's simply having fun. So while Bananas may not dig as deep as some of films would, it was his first major hit as a filmmaker, paving the way for the critical and popular acclaim he would later enjoy.

Allen himself stars as Fielding Mellish, one of the quintessential nebbishes for which he would come to be known, a product tester who falls in love with a young leftist dissident named Nancy (Louise Lasser). It turns out that he isn't a strong enough leader for her revolutionary sympathies, so she breaks up with him, leading to a series of mishaps and misunderstandings that put Mellish in charge of a fictional banana republic in Latin American that strongly resembles Cuba. As the new commandant, he travels to America to negotiate peace and win back her heart.

The film is, of course, steeped in leftist politics and ideals of the 1970s characterized by Fidel Castro and the remnants of the hippies era of American political activism (something Allen would later return to in his 2016 TV series, Crisis in Six Scenes). He pokes gentle fun at the revolutionary rhetoric of the young, while saving more pointed barbs for American military interventionism (the legendary Howard Cosell appears as an American TV announcer covering an gamely covering an assassination). It's amazing how so much of it still seems relevant today, with Cosell's announcer eerily presaging the idea of news as entertainment. While the comedy is often too broad and too rapid-fire to really stick (jokes fly by so quickly that they almost don't have time to land), Bananas is clearly the work of a filmmaker ready and willing to experiment. Allen would certainly make funnier and more experimental films in his day, but when it comes for sheer, unadulterated fun, he never seemed more youthful or more exuberant than he did here.