Year in Review | The Top Ten Documentaries of 2017 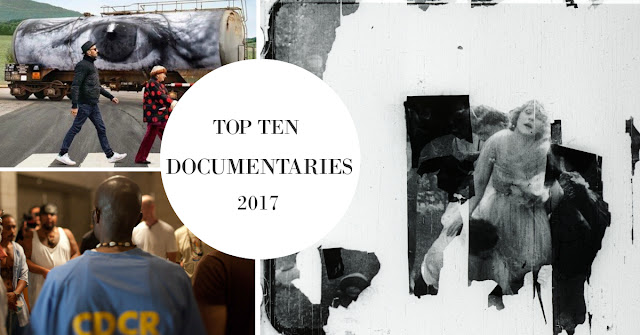 2017 may have been a dismal year for animation, but it was a stellar year for documentaries. Each film on this list is a gem, and some may even reappear on my top ten films of the year list, which will be revealed next week. You know it has been a good year when you're forced to leave off films you love, like Kedi, The Island and the Whales, and Whose Streets?, but that's the nature of the game. The following represent my choices for the very best in documentary filmmaking from the past year.

There's just something about these flickering images that is hard to shake; a magic that is almost indescribably beautiful, as if we are watching history come to life through film. Part historical document, part cinematic fever dream, Dawson City: Frozen Time is a film to be treasured, a living document of a bygone era whose influence continues to echo through history. Luis Bunuel once said, "In the hands of a free spirit the cinema is a magnificent and dangerous weapon. It is the superlative medium through which to express the world of thought, feeling, and instinct. The creative handling of film images is such that, among all means of human expression, its way of functioning is most reminiscent of the work of the mind during sleep. A film is like an involuntary imitation of a dream."

If cinema is the place where dreams meet reality, then Dawson City: Frozen Time is a cinematic reverie that takes us on a mesmerizing and deeply moving journey through history, ultimately discovering a kind of immortality buried beneath the snow. Film was born of an explosive indeed; and here, to appropriate a quote by Woodrow Wilson, it's like history written by lightning. It's the best documentary of the year.

Faces Places is at once a joyous celebration of life and a poignant mediation on memory and mortality. Varda, now 89 years old, doesn't see as well as she used to, and often finds herself reflecting on the end of her life. She takes photographs to remember everyone she meets, and collects this snippets of memory like one might collect coins or stamps. Varda trades in something more ephemeral, and buoyed by the energy of her young partner, JR, she explores the things that make us most human. Who will remember us when we're gone? What impact will our lives have on others? On our surroundings? On history? Faces Places finds an elder statesman of the cinema reflecting on her own life and career just as a fresh young talent embarks on his at the same as Varda was when she began her own.

Faces Places is a wonderful film, full of verve and life, an essential work from a great artist in her twilight who refuses to go quietly into that good night.  Varda's warmhearted curiosity remains as important and probing as ever, and the result is one of the most personal and intimate works of her long and storied career.

This is something deeply moving, even profound. A film of great power and that gave me a new hope for humanity. The Work is something special indeed, a film that deserves and demands to be seen. These men are putting in the work. They are healing. And in turn, they are healing others. This should absolutely be a touchstone for revolutionizing the American prison system, trying to turn lives around rather than destroy them. It's also a harrowing look at the circumstances that lead to a life of crime, featuring many men who came from abusive backgrounds so desperate that a life of crime seems almost inevitable.

People can change. There is hope for even the worst among us. That is the beautiful, cathartic message of The Work. I can't think of anything more necessary, or more important, than that.  See this film. Thank me later. It's an experience I won't soon forget.

LA 92 is a bruising, haunting work that gives us a ground level view of the riots with brutal authenticity, positing them not as a good or an evil but a symptom of a much deeper problem, one that we are still dealing with today. It also serves as a warning, that if we do not learn to address our own racism, and deal with its deep-seated historical roots, then this cycle of violence will continue. Which of course it has in places like Ferguson, which was memorably recounted in Sabaah Folayan's similarly powerful Whose Streets.

Eschewing interviews for news coverage and on-the-ground footage of the riots themselves, LA 92 is like a raw wound, a boldly cinematic and heartbreakingly current portrait of racial inequality and historic oppression that is as explosive as it is poignant.

A film of profound empathy. Ai is nothing if not a citizen of the world, and he implores his audience to take a walk in someone else's shoes, experiencing broken humanity on a scale never seen before in human history. Raw, clear-eyed, dream-like, and ultimately hopeful, Human Flow refuses to wallow in misery. Instead, it offers a vision for a global community based on mutual respect that may seem like a pipe dream in today's increasingly polarized climate. Yet there is something deeply beautiful about what Ai has done here; documenting suffering and displacement on an unimaginable scale, while still managing to find tales of courage, hope, and resilience, even in the darkest places. It achieves an almost instinctual balance of macro and micro perspectives, resulting in a work of lyrical activism that gives a stirring voice to the voiceless that will (and should) be hard to shake.

Jonathan Olshefski's altogether remarkable documentary follows the life of one African American family in North Philadelphia over the course of nearly a decade. Beginning at the election of Barack Obama, Quest ends as Trump is beginning his rise in the polls, watching a black family grow under the first black president, still dealing with the effects of systemic racism and general indifference from politicians who aren't looking for votes. While their neighborhood is a generally peaceful one, gang violence, drugs, and fear of the police often rear their heads.

Olshefski's film takes an unfettered, verite-style look at every day life in this neighborhood, and its evolution in a supposedly post-racial society. You'll see no cross-burning or Confederate flags here, but instead a place left behind and forgotten by inherently racist power structures. The result is a film that is alterately joyful and melancholy, raw and intimate, examining the modern African American experience through the microcosm of one small American neighborhood. It's an astonishingly powerful, essential film.

What Wiseman achieves here is both beautiful and extraordinary. His keenly observant eye captures a microcosm of America, wherein everyone seeking to broaden their minds finds themselves on an equal plane with their fellow patrons. Ex Libris displays a profound love of facts and knowledge, something we need now more than ever. But deeper than that, it enters into a broader discussion about a venerable institution fighting to stay relevant in ever changing times. Whether they are expanding their e-book selection, or seeking to digitize their entire collection in an effort to open up access to the vastness of human knowledge to a wider audience, the New York Public Library's dedication to learning, even in the face of adversity, is incredible.


Reading is fundamental, as the old saying goes. In Ex Libris, it's absolutely essential. In a world gone digital, with facts and reality under constant attack, these institutions serve as one of the last remaining strongholds of what is real, proving that libraries are far from obsolete. In fact, they're more crucial now than ever.

A chilling, emotional look inside an Iranian prison for young women, Mehrdad Oskouei's documentary, Starless Dreams, is a powerful and thoroughly engaging examination of how cycles of poverty affect generation after generation. It may be set in Iran, but its themes are universal. They are products of their environments, victims of a faceless system, and a society that seemed to have it out for them from the start, the girls little more than self-fulfilling prophecies. And yet, Starless Dreams posits that the community they build for themselves inside the prison walls may actually be a more positive environment than the one that awaits them outside.

We come away with conflicting feelings of hope, joy, and sadness, as Oskouei finds a stunning array of emotions in the prison. Yet its most nagging sense is that, once these girls leave, it is into a cold world that does not want them. Forgotten and neglected, they create a family of their own in prison, at once isolated and the only real sense of community they may ever know. Starless Dreams tackles a macro problem on a micro scale, offering a fascinating and ultimately heartbreaking look into a world of young women victimized by their sex and their class, deprived of opportunity and never expected to rise above their situation. It's a wrenching and deeply empathetic look at systemic poverty and oppression that is hard to shake.

Brett Morgen examines the life and work of legendary primatologist, Jane Goodall, in his lovely and often mesmerizing new documentary, Jane. Utilizing long thought lost footage shot by Goodall's ex-husband, the legendary nature photographer Hugo van Lawick, Jane is both a celebration of Goodall's work and a tribute to the woman herself. Goodall was a secretary with no college degree when she was sent to the jungles of Tanzania to study chimpanzees, ultimately becoming one of the most respected primatologists in the world due to her groundbreaking research.


Through fascinating original footage of her studies and interviews with Goodall herself, Morgen assembles a beautiful portrait of an extraordinary woman and her unlikely relationship with her animal subjects. Through her studies we came to understand not only primate behavior, but our own origins and evolution. Featuring a gorgeous score by Philip Glass, Jane is an often powerful experience that offers an enchanting look into the study of African wildlife in a way that feels like peering into a mirror.

Theo Anthony's formally audacious documentary, Rat Film, takes a look at the history of the city of Baltimore through the lens of its rat population. Its a fascinating hypothesis - are we just rats in a maze? Caught in a city divided by unseen barriers created by men in smoky back rooms trying to keep the races apart?

Anthony follows those tasked with exterminating rats, pet owners who love them, home owners who hate them, and everyone in between, all the while pondering if perhaps it's the humans who are the intruders rather than the other way around. I'm not 100% convinced that the film connects its thesis in a fully satisfying way, but what a compelling and radically ambitious experiment it is. Anthony pushes the bounds of documentary filmmaking in order to ask the big questions not only about life itself, but about humanity's occupation of this earth and our endless capacity to divide each other up through arbitrary boundaries. Are the rats the pests? Or are we? The questions are all there, and Rat Film works like hell to ask them. It's a bit scattered, occasionally unfocused, but so ingeniously conceived and boldly crafted that it simply cannot be ignored.