I was a fan of figure skating from a young age, so I have distinct memories of the 1994 assault on Nancy Kerrigan for which Tonya Harding gained infamy. Being only seven years old at the time, I wasn't fully aware of all the circumstances surrounding the attack, but I remember the shock of discovering that one of Kerrigan's fellow figure skaters was involved. Even at seven, it just all seemed to crazy to believe.

Therein lies the premise of Craig Gillespie's I, Tonya; it all is absolutely too crazy to be believed. Combining testimony from both Harding (Margot Robie) and her husband, Jeff Gillooly (Sebastian Stan), as well as Harding's mother, LaVona Golden (Allison Janney), and co-conspirator Shawn Eckhardt (Paul Walter Hauser), Gillespie paints a "truth is stranger than fiction" portrait that is an admitted amalgam of truth and lies filtered through the eyes of those who lived it. What makes the story so fascinating is that the testimony of the key players is so wildly different, and I, Tonya revels in the half-truths, exaggerations, and outright fabrications to craft a tale that exists somewhere in between truth and fiction. 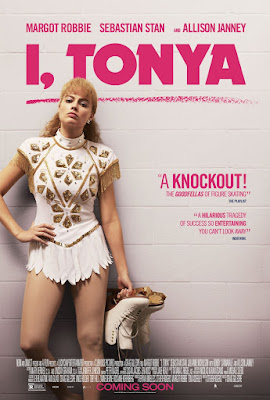 Robie's Tonya is a troubled woman, with an abusive mother and an abusive husband, who wants nothing more than to be the best figure skater in the world. The first American woman to land a triple axel in a competition, Harding was undeniably talented, but was unpolished; an unrepentant bad girl whom the judges had little patience for. The film examines the thorny circumstances surrounding the infamous assault on Kerrigan before the 1994 Olympics, which lead to Harding being banned from professional figure skating, but wonders just how complicit she really was. Was it a ridiculous prank that got out of hand? Did the acceptance of sending death threaters to Kerrigan (the initial plan that lead to the assault) make her culpable in the final outcome?

Harding, for her part, refuses to take the blame for anything, which is what makes her such a complicated figure. She's foul-mouthed and rough around the edges, and surrounded by idiots that constantly push her down the wrong path. It's a cast of larger-than-life characters straight out of a Quentin Tarantino film, if Tarantino ever made a film about figure skating. But Gillespe has bigger aims, asking us to examine our own complicity in a culture of celebrity that helped breed, and then destroy, the persona known as Tonya Harding. In one of the film's most chilling moments, Robie's Harding looks directly into the camera and accuses the audience of being her abusers, every bit as responsible for tearing her down as the family that abused her physically.

I only wish the film had followed that line of thought a little more convincingly, as it's a goldmine of thematic riches. I, Tonya is a film about our culture of celebrity and the merciless 24 hour news cycle as it is about Harding herself. It's a film that dwells on speculation and suggestion rather than actual facts, and it asks us to examine our own thirst for scandal and consumption of such tabloid journalism affects real people. Robie's Harding is neither angel nor devil, she's a wounded woman living in a world that as much of her own devising as it is of those around her. Where does Harding the media creation end, and Harding the person begin?

Who's to say? That's what I, Tonya is getting at here. It's not a perfect film. It's sharply written, and Robie and Janney are sensational, but it leaves some of its strongest thematic content untapped. Yet even if it isn't as psychologically complex as it could be, it still dwells in a kind of ambiguity that makes us question our perception of a person and an event we thought we understood.  It doesn't ask us to like Harding, it only asks that we empathize with another human being, and acknowledge that perhaps, just maybe, there are multiple sides to a story that once seemed cut and dried. By peering beneath the seedy supermarket tabloid veneer of its story, it manages to find a disarming humanity that goes much deeper than the sensational headlines ever suggested.