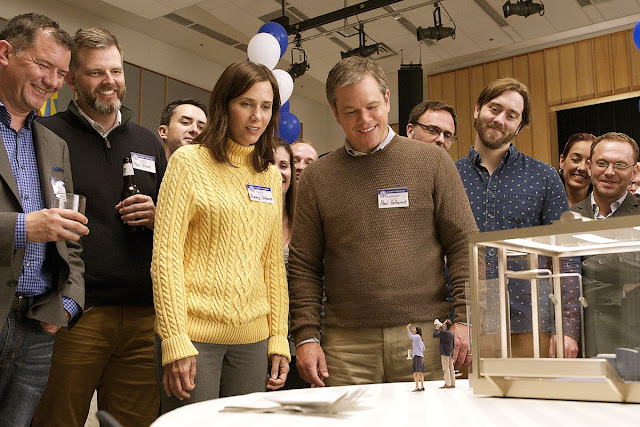 Alexander Payne's Downsizing starts out with an interesting premise: scientists, working to solve the problem of human overpopulation and global warming, invent a method for shrinking people down to save resources. However, once it sets up its main idea, it seemingly has no idea what to do with it.

Enter Paul Safranek (Matt Damon), an occupational therapist whose life got in the way of his dreams, and his wife, Audrey (Kristen Wiig). Weighing the financial options, they decide to undergo the downsizing procedure and move to Leisureland, where there $100,000 in assets translates to $12 million, making them set for life. But once Paul comes out of the procedure, he discovers that Audrey got cold feet and decided not to go through with it, leaving him stranded, five inches tall, in a whole new world. 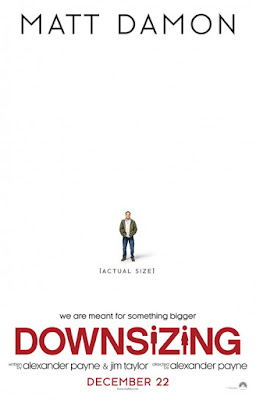 Depressed and alone, Paul tries to adjust to his new life with the help of his hard partying neighbors, Dusan (Christoph Waltz) and Konrad (Udo Kier), but nothing seems to work. That is until he meets Ngoc Lan Tran (Hong Chau), a downsized Vietnamese dissident who escaped persecution in her home country by hiding in a TV box that was shipped overseas. Now cleaning houses in Leisureland for a living, Ngoc shows Paul the unseen underbelly of poverty amongst the downsized, in the process giving him a new purpose and outlook on life.

If it all sounds a bit aimless, that's because it is. Payne has made some great films, from Election, to About Schmidt, to Sideways, to Nebraska, but he seems woefully out of his element here.  He just doesn't seem to know what to do with the story's sci-fi elements, taking a strong main idea ripe with possibility for an exploration of humanity's toll on the earth, and turns it into a muddled, unfocused mess that can't seem to decide what it wants to be or what it wants to say. It's all set-up and no payoff, getting lost along the way in subplots that ultimately lead nowhere.

The only real bright spot is Hong Chau, who is so good as Ngoc that it makes the film's treatment of her all the more egregious. Ngoc seems to exist merely to save Paul, and as a target of ridicule for her thick Vietnamese accent. Payne is punching down here, turning Ngoc into a excruciating Asian stereotype that Hong valiantly tries to subvert. She manages to find the humanity in a thinly written character that does her no favors, but that doesn't stop her from acting the hell out of it anyway. She is remarkable even when the film stumbles and falls. It's a shame given Payne's strong overall track record, but Downsizing just does not work, losing itself among political ambitions that are both painfully on the nose and woefully undercooked. It does nothing to deserve Hong's terrific performance, choosing instead to traffic in racial cliches for cheap laughs, easily making it Payne's weakest film as a director.