2017 has been a pretty dismal year for animation. After an embarrassment of riches in 2016, there have been relatively few animated efforts that have made much of an impression this year. Blue Sky's Ferdinand is a surprisingly egregious entry into this already weak year, taking a bizarrely wrong-headed story into a world of inane slapstick that doesn't work on any level. 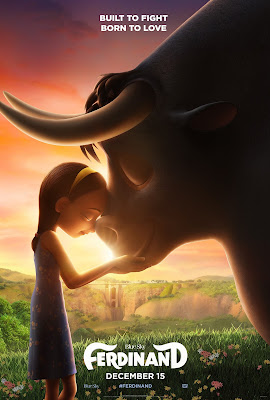 It feels like at attempt by Blue Sky (the studio responsible for the Ice Age films) to reach for Dreamworks style animation, with the story of a Spanish bull bred to be a fighter who only wants to grow flowers in peace. It's a story that would feet at home among animated Dreamworks films like How to Train Your Dragon or Kung Fu Panda, or even Pixar's slate of films about every day objects or items in extraordinary situations. Instead, it's saddled with crude humor and a weak script, its frenetic energy never really slowing down to catch its breath or let the story breathe.

Not to mention the fact that Spanish bullfighting is a really strange topic for a children's film, especially considering that bulls who don't make the cut are then carted off to the slaughterhouse. Ferdinand (John Cena) is a lover, not a fighter, but he's born into a world that expects him to be a fighter. There's a heartwarming story there, but Ferdinand is not it. It's a frenetic, overstuffed product rather than a film, seemingly meant to be little more than flashing lights to entertain children with particularly short attention spans.

Kate McKinnon is one of the few highlights as a wise-cracking goat, but the character animation is just so plain and often unattractive that it makes most of the characters off-putting. The locations and backgrounds are gorgeous, but the characters are a strange and repulsive lot that never really make much of an impression. John Powell's score is also lovely, and one wishes that the film had earned the emotional heft that he lends to the story.

Ferdinand just doesn't have a strong enough personality of its own. It feels like a loosely collected series of cliches, celebrating those who don't fit the mold of whats around them but without bringing anything new to a tried and true theme. Its surprisingly dark undercurrents don't jell with the lame humor of rest of the film, resulting in a production that never seems to be taking itself seriously, putting a violent and abhorrent sport at the center of an "inspirational" tale for children about being true to yourself in a way that feels both tasteless and toothless. This isn't the 1980s, and the dark kids movies of that era like The Land Before Time, The Brave Little Toaster, and An American Tail were at least able to back up their existentialism with heart and characters worth caring about. There's just nothing here that we haven't seen done before in much better ways, making Ferdinand an almost instantly forgettable experience.