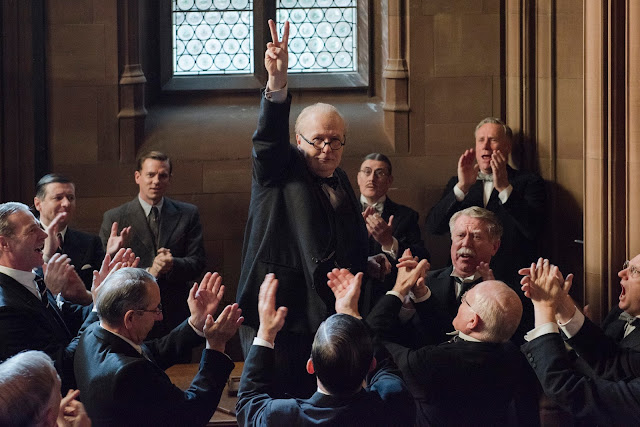 Watching Joe Wright's Winston Churchill biopic, Darkest Hour, mere months after the release of Christopher Nolan's Dunkirk is a strange experience. It somehow manages to feel like both an essential extension of, and a lesser cousin to, Nolan's towering visceral achievement. And yet, it couldn't be further away from the feverish chaos of Dunkirk, dwelling instead in the darkened halls of Parliament where words rather than bullets are the weapons of choice.

The film focuses on the days leading up to Operation Dynamo, the civilian boat evacuation of Dunkirk that was depicted in Nolan's film, and Churchill's singleminded struggle to convince Parliament that war, rather than appeasement, was the only way to stop the Nazi advance across Europe. After Neville Chamberlain was forced out of office in 1940, Churchill was elected Prime Minister of Great Britain to form a coalition government. Yet many in his party believed that the only way to keep from being invaded by Germany was to strike an agreement with Hitler and stay out of the war raging in Europe. 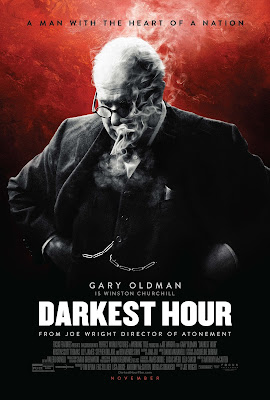 Churchill believed strongly that Hitler would never hold up his end of any bargain, and that Britain's allies currently being overrun by the German military on the continent needed Britain's help rather than its apathy. So he set out to convince his cabinet, his Parliament, and his king, that Britain must fight, only to find his entire military stranded on the beaches of Dunkirk, France, surrounded by a superior German force. Trapped between a rock and a hard place, Churchill is forced to risk invasion and the annihilation of the British homeland, or strike a bargain with an evil tyrant and abandon the rest of Europe to its fate.

Darkest Hour often feels like the flip-side of the Dunkirk coin, showing us what was going on in the halls of power leading up to and during the evacuation.  Yet what makes it so interesting isn't just Gary Oldman's remarkable performance as Churchill, it's how it displays a much different kind of violence. Churchill "weaponizes the English language," as one vanquished foe begrudgingly grumbles. And indeed, while war wages in Europe, a war of words wages in Britain.

It is unfair to compare the film to Dunkirk, however, because they really have nothing to do with each other, other than focusing on similar events from very different perspectives. But they compliment each other very well, even if Dunkirk is ultimately the more daring and stylistically engaging work. Darkest Hour is more akin to Steven Spielberg's Lincoln, yet Wright (Atonement, Anna Karenina) doesn't quite have Spielberg's uncanny sense of pacing. It drags here and there, and has a rather familiar dramatic structure, but for the most part it's riveting cinema, turning parliamentary procedure into the stuff of great drama.

Oldman is, of course, every bit as good as you've probably heard, nearly unrecognizable under makeup and prosthetics in a role that seems tailor-made to win an Oscar. Oldman tears into the role with great relish, and deserves all the praise that's surely heading his way in a way that brushes aside any comparison's to John Lithgow's Emmy-winning turn as Churchill in the Netflix series, The Crown. The film itself may seem like the most basic form of Oscar bait, but Wright has a knack for visualizing the seemingly un-cinematic, and he creates a compelling film out of the backroom deals and Parliamentary finagling that went into convincing Britain to wage war against Hitler. It may not be as lofty or as moving as it seems to be trying to be, but it is nevertheless a solid chamber drama anchored by an incredible performance by its star. It also deserves to be watched in conjunction with Dunkirk. Together they make an unintentional diptych that presents a wide-ranging and powerful portrait of the events leading up to WWII, ending in similar places and giving greater insight into the the early stages of the most deadly conflict in modern human history from the perspectives of the men on the ground, and the men who sent them there.