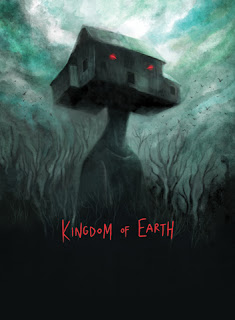 This is the beginning of what I hope will be an ongoing feature here at From the Front Row. While the main focus of the site will continue to be film, I've decided to expand its focus a bit to spotlight some local theatre productions here in North Carolina. While I have probably devoted more time and energy in my life to studying and writing about film, my actual career is in theatre, so why not shine a spotlight on some of the wonderful stage venues here in NC?

Triad Stage's production of Tennessee Williams' little-seen Kingdom of Earth is the perfect place to start. While not as well known as Williams' more iconic plays like A Streetcar Named Desire or Cat on a Hot Tin Roof, Kingdom of Earth is nevertheless a vivid and nuanced work. Triad's production, which was directed by theatre co-founder Preston Lane, is filled with the gritty essence of Williams' hard boiled southern language, from the sweet smell of bacon and tobacco that occasionally wafts through the theater to the evocative set design by Anya Klepikov.

The first thing you notice upon entering the theater is the massive wall of water that serves as a backdrop for the set. Using dripping water against a large, backlit scrim, the waterfall  gives the show a very particular atmosphere, representing the almost supernatural rain storm that surrounds its characters, threatening to flood the house of Lot (Clayton Fox), an aloof, sexually ambiguous Southern aristocrat who has returned to his ancestral home with his new wife, Myrtle (Ryah Nixon). Myrtle, a former showgirl, seems like a crass force of nature amid the delicate furnishings of the house, which seems overshadowed by the spirit of Lot's overbearing late mother, whose dress sits perched atop a staircase overlooking the set.

It is a marriage of convenience, we discover, a contract forged in order to insure that Lot's half brother, Chicken (Philippe Bowgen), will not inherit the house. Chicken is quite literally the black sheep of his family, whose partial African American ancestry has caused him to be an outcast among the genteel southern society. As the rains fall and the flood waters rise, tempers will flare, secrets will be revealed, and the last gasp of an old family's fierce traditions will be played out among these three lost souls, who may as well be the last people in this kingdom of Earth.

Strangely enough, the play's thematic significance reminded me a bit of Bela Tarr's The Turin Horse, with its isolated characters surrounded by an apocalyptic gale (chillingly rendered through Phillip Owen's terrific sound design, as well as eerie lighting work by Jesse Belsky). The set even recalls a sort of Noah's Arc, reinforcing the underlying theme of apocalyptic imagery. The play is billed as "a southern gothic," which it absolutely is, but it isn't without its humorous moments. Ryah Nixon's larger than life performance as Myrtle steals the show, and Philippe Bowgen's Chicken proves more than her match when the sparks begin to fly. And while Clayton Fox's Lot isn't given that much to do, especially in the second act, he makes an impression nonetheless.

Tennessee Williams has long been a favorite of Triad Stage, which opened in 2002 with a performance of Williams' Suddenly Last Summer. Since then, Triad has mounted 4 more productions of Williams' plays, including Kingdom of Earth, which remains one of his more obscure works. It's surprising given its intensity - Williams pulls out all the stops here, delivering an entertaining ride that is hard to shake. To celebrate Williams' return, Triad has placed a cardboard figure of the famed playwright in its lobby (pictured above), encouraging patrons to have their pictures taken with it, and to post them on Twitter with the hashtag #cardboardwilliams. It's a clever promotion showcasing Triad's continued dedication to the spirit of the South, and its most revered playwright. In Kingdom of Earth, they deliver a refined mint julep of a production with a decidedly sharp twist.