Review | "Night Across the Street" 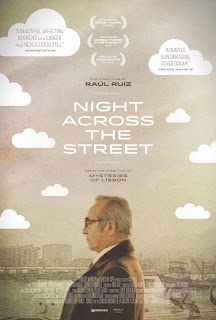 When Chilean director Raul Ruiz passed away in 2011, his epic, 5 hour masterpiece, Mysteries of Lisbon, had just been released in US theaters two weeks prior. It was a great, career capping masterwork that any filmmaker would have been proud to go out on. But Ruiz had one more film it him that was completed before his death, and while it may not be the masterpiece that his penultimate work is, Night Across the Street makes for a sublime swansong to an impressive career.

Smaller in scale and scope than Lisbon, Night Across the Street is a quieter, more unassuming farewell to be sure. But it is also a remarkably strong meditation on life and death, greeting death as an old friend rather than an enemy to be feared. The resulting film seems like a warm embrace, at times scattershot, at times involving, always fascinating - a prismatic stock of a life as viewed by a man in final stages of his life. Death is coming, one way or another. And here its arrival is fully accepted.

Like fallen leaves caught in an autumn breeze, memories tumble through the mind of an elderly office worker who is facing a forced retirement after years of dedicated service. These memories, some real, some imagined, make up the picture of a life well lived, as he faces his own impending irrelevance. The memories range from bittersweet, to funny, to musings of a child living in his own rich fantasy world. He recalls meetings with historical figures such as Beethoven, a childhood hero, and fictional characters like Long John Silver. What's real and what's not is ultimately unimportant, what is important are the impressions that life has left behind. Night Across the Street plays like a lucid dream, an extraordinary walk through life that is both moving and amusing.

Based on a series of short stories by Chilean author Hernan del Solar, the film eschews typical narrative form  for something more impressionistic (reinforced by its dreamlike use of greenscreen). Del Solar belonged to a group of writers called the "Imaginists," who rebelled against naturalistic writing for something more imaginative and less formal. Ruiz' film captures that spirit without ever feeling as if its just being whimsical for whimsy's sake. It is a film that is both warm and cold, sweet and sour, loving and biting. Ruiz went out not with a bang, but with a whisper. But it is a gentle whisper, a finely tuned rumination on life and death, endings and beginnings, that proved remarkably prescient. As the great director's final statement to the world, Night Across the Street is a fond and fitting farewell.