Blu-ray Review | "Night of the Demons 2" 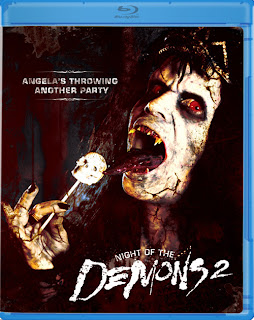 When I was a little kid, I spent a lot of time wandering around the horror section of my local video store, looking at the grotesque VHS cover art and wondering what horrors lurked within those tapes that I knew my parents would never let me rent.

Being much older (and hopefully wiser) than I was in the early 90s, I came to the film with a little more trepidation, and a little more discernment. How good could a movie called Night of the Demons 2 possibly be? The answer - pretty damn good. 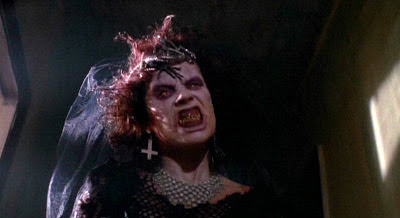 It's actually quite a bit better than it has any right to be. Sure it has all the over the top gore, gratuitous nudity, and unintentional homo-eroticism we have come to expect from the genre films of the time, but there's something unexpectedly self aware about it that makes it a pleasure to watch. Taking its cues from the Nightmare on Elm Street series (director Brian Trenchard-Smith refers to its demonic antagonist, Angela, as the "female Freddy" in the commentary), Night of the Demons 2 never takes itself too seriously, although it more resembles the later, more campy entries in the Elm Street series than the more frightening original.  There's still a few scares to be had though, as a group of hormonal teenagers at a Catholic school head to the infamous Hull House on Halloween, home of a local urban legend about a monstrous demon named Angela who is said to roam its halls. Along for the ride is Mouse, Angela's soft spoken sister, who is horrified to learn that Angela is very much still alive, and in need of a human sacrifice. As the teens are possessed one by one, it is up to the school's severe headmistress, Sister Gloria, to do battle with Angela and send her back to Hell where she belongs.

With its tongue planted firmly in cheek, Night of the Demons 2 is a deliciously ridiculous ride. How many other movies can claim to have nuns battling demons with holy water guns and balloons? While a few of the performances may be a bit wooden, the special effects are actually pretty nifty (a girl's breasts turn into hands before reaching out and grabbing an unfortunate victim) and the makeup work is surprisingly strong. The new Blu-ray by Olive Films is surprisingly sharp given the film's age and budget, and while it is pretty bare bones features-wise, the commentary with director Trenchard-Smith and director of photography David Lewis is pretty entertaining. This is an overlooked gem of 90s horror, a fun, campy, self referential work of low budget excess that is almost impossible to resist. It may not have the same kind of following as A Nightmare on Elm Street and Freddy Krueger, but its actually better than some of that series' lesser sequels, and far more clever than its title and subject matter would suggest. Horror aficionados will find a lot to appreciate here, but even beyond the die-hard genre enthusiasts, Night of the Demons 2 will be a delightfully frightful discovery.