Blu-ray Review | "The Ballad of Narayama" 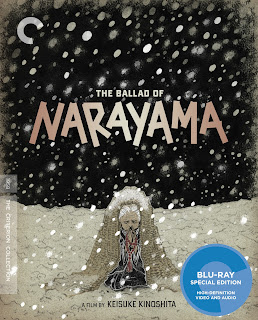 In Keisuke Kinoshita's audaciously experimental The Ballad of Narayama (1958), artifice becomes a vessel of truth, turning theatrical illusion into something boldly cinematic. I was struck, watching the film in 2013, 55 years after its release, by how much it reminded me of Joe Wright's much more flawed adaptation of Anna Karenina. Seeing Narayama in such close proximity to Wright's film makes the shortcomings of Karenina seem all the more glaring.

Inspired by traditional Japanese Kabuki theatre, The Ballad of Narayama makes no effort to disguise its artificiality. Shot almost completely on soundstages, the film retains the theatricality of Kabuki, transitioning its characters between scenes and locations with the drop of a scrim or a shift in the lighting. It's a dazzling effect, the stunning backdrops and set design inviting the audience into its world rather than keeping them at arm's length through the exploration of essential human truths.

The story revolves around the Japanese legend of Obasute, the practice of sending the village elders out to die when they reach the age of 70 so they will not be a burden on their family. In this case, the elder is Orin (Kinuyo Tanaka), who has quietly accepted her fate as part of her duty to her family and her village. Not wanting to be a burden in a destitute village that can barely sustain its citizens, Orin constantly plans for the time that she must leave to climb Mount Narayama, where she will die of exposure like so many elders before her. So determined is she to uphold tradition, she bashes her own teeth in so she can better fit the gossiping villagers' prejudices, who see good teeth at her age as a sign of greed and vanity.

Her son does not want to lose her, but her doltish grandson and his piggish wife are more than happy to see her go, making up insulting rhymes about her which they sing constantly. All the while a plaintive narrator sings the titular ballad, keeping the audience abreast of the action and the characters feelings. It's a bit alienating at first, Westerners may have some trouble adjusting to the very particular timbre of Kabuki. But Kinoshita uses the language of theatre to find a deep resonance in this tale of conscience clashing with tradition.

Nowhere is this more poignantly demonstrated than in the plight of an old man in the village refuses to go quietly to Narayama, and is shunned by his family for being too big of a burden.  Orin feeds him, but tries to convince him to join her own her journey. In The Ballad of Narayama, tradition is everything, held up above even morality. The film is enamored by the cycle of life as seen through a woman who is at peace with her lot, selflessly sacrificing herself on the altar of a selfish younger generation. Only at the end, when the film finally leaves its sumptuously designed sound stages, is there any hint of eventual progress for post-war Japan, in which a train barrels inexorably toward a place called Obasute - the train of life hurtling toward death.

In Japan during WWII, morality took a back seat to tradition, and The Ballad of Narayama is a haunting reminder of the consequences. Its gorgeous sets and backdrops, awash with vivid color, remain as false as the useless traditions that its characters cling to. There is beauty in tradition, but not at the expense of essential human goodness. While the new Blu-ray release by Criterion is disappointingly bare-bones by the boutique label's usual standards (a lone theatrical trailer serves as its special feature), the transfer is absolutely stunning. As one of the most beautiful, and most overlooked, films of Japan's golden age, The Ballad of Narayama is a fascinating find - a moving portrait of aging and loss that uses theatre as a weapon for truth.

Now available on Blu-ray and DVD from The Criterion Collection.
Email Post