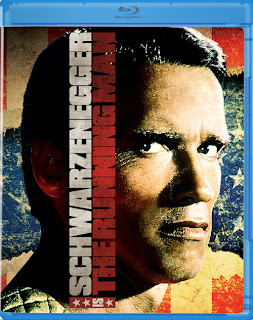 For all the jokes that are made at Arnold Schwarzenegger's expense, especially regarding his thick accent and occasionally wooden acting, the man has made some pretty good movies during his career.

He's made some stinkers too, to be sure. But from Terminator to Total Recall to The Last Stand, Schwarzenegger has actually made some pretty good career choices, give or take becoming governor of California (depending on your point of view). One of his strongest works of the 1980s was Paul Michael Glaser's The Running Man, which despite providing Schwarzenegger with one of his best roles, is often overlooked in favor of some of his more successful works of the decade. The Running Man is nevertheless a film ahead of its time, a futuristic riff on The Most Dangerous Game that would provide the template for many such books and films to come, right up to and including The Hunger Games. 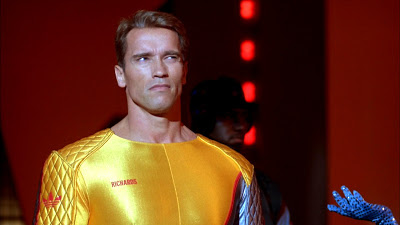 Based on an early novel by Stephen King (when he was still writing under the pseudonym, Richard Bachman), The Running Man is set in a dystopian future where criminals are thrown into the middle of a vicious reality show where they are hunted down by trained gladiators for a cheering audience at home. Criminals, of course, is a loose term, because most of these contestants are actually political dissidents and other enemies of the state. In the case of Schwarzenegger's Ben Richards, a former police officer who is arrested for refusing to carry out orders to massacre a group of unarmed civilians.  He meets members of an underground resistance group while in prison, and plots a daring escape. But his physical prowess soon captures the attention of the producers of the "Running Man" TV show, and after he is caught, he is dragged into the game along with two of his resistance comrades and a former hostage he took during his escape that has learned the truth about Richards' arrest. They will live or die together as massive, highly trained killers, each with their own unique weapon, enter the arena determined to execute the prisoners in front of a national audience.

It's a remarkably prescient media satire, presaging the reality TV craze by almost 15 years and even went so far as to cast Family Feud's Richard Dawson as the show's egomaniacal host. The effects are a bit cheesy, even for the time (compare this to something like Blade Runner or Aliens), but it's still undeniably smart filmmaking. Even Schwarzenegger's endless parade of puns aren't as grating as they are in Batman & Robin. That's because Glaser (who is best known for play Starsky in the original Starsky and Hutch series) actually has something intelligent to say about a bloodthirsty public's desensitization to violence and increasing demand for death, turning their allegiance on a dime for whoever has the best chance of killing someone else at the time. The host handing out "The Running Man - Home Version" board game to spectators in the studio audience is an especially clever touch. On Blu-ray the film looks quite good, the vibrant 80s colors really pop in HD, although the film shows its age a bit in the darker moments. There are no special features other than a commentary with Glaser. It would have been nice to hear from Schwarzenegger, or even Stephen King, but the film remains a strong entry in the actor's filmography that stands along some of his very best work.