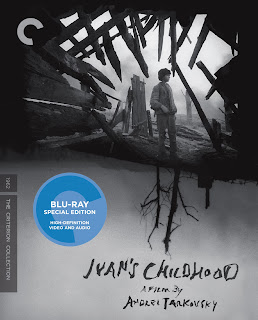 Andrei Tarkovsky once said that he made Ivan's Childhood "to establish whether or not I had it in me to be a director."

As it turns out, he did. And more. Tarkovsky would go on to become one of the key figures in Russian cinema and one of greatest directors in cinematic history, directing such films as Andrei Rublev, Solaris, The Mirror, and The Sacrifice. Tarkovsky left an indelible imprint on the cinematic landscape, and it all began with Ivan's Childhood.

While it was not as sweeping or profound perhaps as some of his later works (his final film, The Sacrifice, is the stunning work of a dying filmmaker coming to terms with his own mortality), but his brilliance was on full display right from the outset. Ivan's Childhood would be the first masterpiece in a career full of them, and its influence can be felt throughout all of Tarkovsky's filmography.

Released in 1962, Ivan's Childhood arrived at an interesting time for Russian cinema. While World War II still dominated the national consciousness, filmmakers had begun tackling the war from a darker, less propagandistic angle that the Communist censors had previously allowed. From the early days of film, Soviet cinema had long served to first glorify the workers (as in Eisentsein's Strike and Kalatozov's Salt for Svanetia) or as straight propaganda (Dziga Vertov's documentary Stride Soviet! and Lev Kuleshov's satirical The Adventures of Mr. West in the Land of the Bolsheviks), then as a glorification of the Soviet ideal by way of established Communist party (Eisenstein's Stalin-commissioned work, Alexander Nevsky). It was a brief window that gave rise to such films as Mikhail Kalatozov's The Cranes are Flying and Letter Never Sent, two films that had a clear influence on young Tarkovsky.

Ivan's Childhood paints a grim picture of war through the eyes of a child, young Ivan, a nine year old boy who has been enlisted by the Russian army as a scout on the front lines against the Germans. Ivan's size makes him ideal for the job as he is able to remain hidden, but the danger inherent to his missions gives pause to his commanding officers, who decide to send him off to military school instead. The headstrong Ivan refuses, running away instead to join a group of partisans, determined to do his part at all costs.

It is ultimately a film about the destruction of childhood, and in a broader sense, the destruction of national innocence. Tarkovsky's sharp, angular mise-en-scene is almost reminiscent of German Expressionism, framing the film in the destruction of a burned out landscape and creating an ever increasing fear of madness in a world that has descended into chaos. Although it's doubtful Tarkovsky ever saw the film, I was struck by just how much it reminded me of Stanley Kubrick's debut film, Fear and Desire in its depiction of wartime unease. Tarkovsky's effort ends up being more successful than Kubrick's more scrappy production, however. The striking use of light and shadow, a visual aesthetic inspired by the work of Polish filmmaker Andrzej Wadja. The beams of light streaming through windows and slats of wood cast on almost unearthly light in the darkness, made even more indelible through Criterion's stunning new Blu-ray transfer. Tarkovsky also uses stirring visual metaphors and even film negative to create the jarring effects of war on the psyche of its soldiers. Ivan's dream sequences recall the montage work of Eisenstein in their occasionally frenzied evocation of madness, but while Tarkovsky clearly had many influences that can be keenly felt here, he combined them into something uniquely his own.

That's part of the remarkable power of the film. It's familiar yet unique (also recalling another harrowing anti-war film from the time, Kon Ichikawa's Fires on the Plain), an amalgam of inspirations coalesced into something both thrilling and devastating. Tarkovsky would continue to develop his own unique style in subsequent films, a style that would be just as influential to a whole generation of filmmakers as Eisenstein, Kalatozov Wadja, and Mizoguchi were to him. Ivan's Childhood remains one of the most remarkable debuts in all of cinema, and one of the most indelible portraits of war and childhood ever made.