Review | "Happy People: A Year in the Taiga" 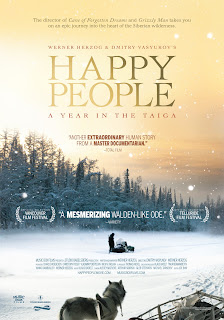 There's something about the voice of Werner Herzog that could turn even the most mundane of moments into the most profound poetry.

In his latest documentary, Happy People: A Year in the Taiga, Herzog, along with co-director Dmitry Vasyukov, explores a year in the life of the people of the Taiga region of Siberia, a remote area surrounded by hundreds of miles of wilderness only accessible by helicopter or boat.

These people lead a simple life, living off the land, trapping, hunting, fishing, and fending for themselves alongside their faithful dogs. It is at once a close knit community and a exemplar of self reliance, each person pulling their weight in a world devoid of modern convenience and technology. It is especially interesting that this stellar example of the American ideal of self reliance and pulling oneself up by one's own bootstraps was born out of Communism, the first Russian settlers being assigned to the region by the government back in the 1970s.

I'm sure that would come as a shock those American partisans who espouse such values, but the citizens of the Taiga (one of whom is a descendant of legendary Russian filmmaker Andrei Tarkovsky) have little time for politics. When a campaigning politician shows up in the village with food and singers to attract a crowd,  the villagers all but ignoring him, leaving the young people to stand by as excited onlookers. There is something inherently romantic about this life, a kind of real life Jack London tale where the gratification of hard work in the frozen wastelands becomes the business of living, and mere existence in the most beautiful gift of all. The advertising art rapturously compares the film to Henry David Thoreau's seminal work of transcendentalism, "Walden." But Herzog's meditative narration seems to eschew the Emmerson/Thoreau daydreaming for something more simple and streamlined.

These people are at one with nature, yes. But they don't have time to sit around and wax philosophical about it, and Herzog's thoughtful musings take on a more observational tone. Happy People finds beauty in the simplicity. It may not be as profound as some of Herzog's greater works, like The White Diamond or Grizzly Man, but there is something undeniably powerful at work here. These people are truly happy. They live in perhaps some of the harshest conditions on Earth, working from sunrise to sundown without a day off, and yet are completely satisfied with their lot. It seems we Westerners could learn a lot from the people of the Taiga. And while I wish Herzog had either elaborated or cut out an all too brief segment about the indigenous people of the Taiga, whose traditions have largely disappeared due to rampant alcoholism and the effects of colonialism, the film is still a mesmerizing work of sparse beauty and quiet power. Herzog's voice alone has a kind of meditative quality, and in Happy People it puts things in perspective, offering a welcome respite from a world of hustle and bustle that has become all too superficial.