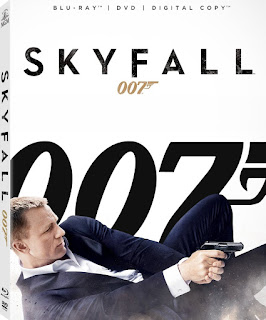 Revisiting Skyfall on Blu-ray only deepens the appreciation for Sam Mendes' stunning achievement. It's been a long time since a James Bond film stirred something in me quite like this. Not even Martin Campbell's Casino Royale, which introduced us to Daniel Craig's younger, edgier Bond, quite reached these heights. Under the direction of Sam Mendes, Skyfall achieves a level of artfulness that has been rare for the series as a whole.

While I'm pulling for the more audacious lensing of Anna Karenina to win the Oscar on Sunday, Roger Deakins' work on Skyfall is truly fantastic. And in high definition, Deakins' achievement becomes all the more impressive. The fiery climax, lit only by the burning rubble of Bond's childhood home, is one of last year's most striking sequences, and it looks even more amazing on Blu-ray. 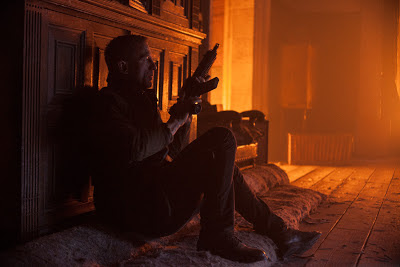 Strangely enough, Deakins has never won an Oscar, despite being nominated 11 times, for such films as Fargo, Kundun, The Assassination of Jesse James by the Coward Robert Ford, and True Grit. It would be nice to see him finally take home the Oscar, but the more showy Life of Pi seems a more likely bet. The rest of the film is pretty top notch as well. In my original review of the film, I referred to it as "the Wrath of Khan of the James Bond movies." And in revisiting the film on Blu-ray, I found that to be doubly true. There is an elegiac quality to Skyfall that is hard to miss. The younger, more brash bond of Casino Royale has been replaced by a Bond facing his own obsolescence. He is a relic of an old way of doing things in a dark new world where the enemy isn't so black and white. It's a bracingly modern post-modern take on Bond, that also pays homage to the series' roots as well.

Longtime fans will love the references to earlier films that bring Bond full circle after 50 years of sequels and reboot, and these references are detailed throughout the extensive special features available on the Blu-ray. The HD picture quality is stellar, and the film itself remains a blast. As I said in my review:


Mendes certainly brings his own unique sensibilities to the project, with a greater emphasis on character to compliment the relentless action sequences. Skyfall opens with a bang, a jaw-dropping motorcycle chase on the rooftop of Turkey's Grand Bazaar that is reminiscent of a similarly over-the-top sequence in Steven Spielberg's The Adventures of Tintin.

I would have liked to have seen Javier Bardem's deliciously evil performance as Silva get some awards traction, but it was probably a bit too close to his Oscar winning work in No Country for Old Men. Judi Dench is also reliably great, adding gravity to an already emotionally weighty film. Mendes balances thematic weight with thrilling action in a way few modern action films ever do. One hopes that the franchise will be able to sustain this level of quality, and that instead of following current cinematic trends as the series has tended to do, Skyfall will become a trendsetter, leading the way for modern action like it did at its height.