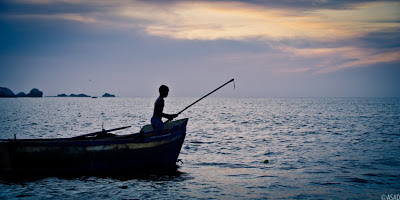 There is a vibrant sense of authenticity to Bryan Buckley's Asad that transcends the abilities of its non-professional cast. Set in Somalia, Asad follows the adventures of a young boy of the same name who dreams of being a Somali pirate like his friends and relatives. He befriends an old fisherman who encourages him to choose a different path. Rogue soldiers from Mogadishu begin to change the face of the town, however, and soon Asad is faced with a difficult choice, a choice that could finally lead him to becoming a man. It's a bit too schematic perhaps in its coming of age symbolism, but that's mostly due to the time constraints of being a short film. The actors are all actual Somali refugees, which adds an extra level of emotional depth to the film. Asad is meant as a beacon of hope for a better Somalia, which the end credits clearly state in a way that feels a bit hokey, but it's earnest, which goes a long way.

Director Bryan Buckley was dubbed the "King of the Super Bowl by the New York Times for having directed more than 40 Super Bowl commercials. Here he demonstrates a sharp eye for drama deserving of a larger canvas than this. Asad isn't a great film on its own, but it's a promising work with a lot of heart. 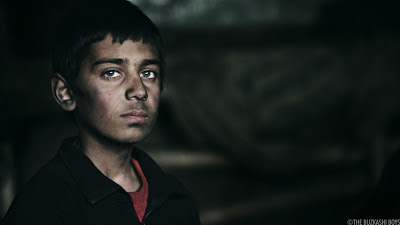 Shot on location in Kabul, Afghanistan, Sam French's Buzkashi Boys is certainly the most pedigreed of the nominees. It's a handsomely shot coming of age tale set against the backdrop of a war-torn land. It's reminiscent of fellow nominee, Asad, in some ways, but feels like a more complete work. The film tells the story of two young boys - one, a street urchin, the other, the son of a blacksmith - who dream of one day becoming Buzkashi riders, participants in the national sport of Afghanistan in which horse riders fight over a dead goat to carry around a flag. One dreams big, the other resigns himself to work in his father's shop for the rest of his life. But an unexpected turn of events could finally inspire them to follow their dream.

It's a fairly typical coming of age story, recalling in some ways the popular novel, The Kite Runner, by Khaled Hosseini. But the end result is something rather unexpected. French takes us on a surprising journey of self discovery that doesn't deal in the "follow your dreams" platitudes one would expect of this kind of film, resulting in something far more complex than it initially appears. It's certainly the prestige picture of the group, and I could easily see it coming away the winner on Oscar night. It has everything the Academy typically goes for, and as such will certainly be a formidable opponent. Being one of the first narrative films to be shot in Kabul doesn't hurt its chances either. It's a touching portrait of modern Afghanistan set among the bombed out ruin of a country still reeling from more than a decade of war. But French finds beauty in the rubble, and Buzkashi Boys is a haunting product of a misunderstood land.

When we first meet Richie, he's languishing in a bathtub filled with his own blood, in the middle of committing suicide. His death is interrupted by his estranged sister, begging him to come babysit his nine year old niece, Sophia. Intrigued, he postpones his suicide to oblige. The girl is precocious, presenting him with a list of appropriate places to take her and warning him if he doesn't return her home by 10:30, "there will be hell to pay." At first they have very little interest in each other, with Richie awkwardly trying to start conversations and Sophia far more interested in the games on her phone. But something spectacular will happen tonight; through this little girl Richie will find a new lease on life, and in Richie, Sophia will find a champion she never knew she had.

On paper it may sound a bit treacly, but Christensen (who also stars in the film as Richie) navigates tricky emotional waters with a deft hand. Curfew is the most fully realized of the nominees, and my personal favorite of the bunch. There is a lightness to Christensen's touch that is hard to resist. He imbues his film with a wit and a warmth, beautifully celebrating the strength of the ties that bind without pretense or false emotion. It's a vibrant film, pulsing with life and energy that refuses to put simple Band-Aids on complex problems, instead choosing to celebrate life in all of its messy glory. This one's a winner.

If any of the Best Live Action Short nominees deserve to be turned into a feature film, it's Tom Van Avermaet's Death of a Shadow. Steampunk is a subgenre that has already worn out its welcome, but is use in this sci-fi drama is surprisingly effective. It tells the story of a mysterious photographer tasked with capturing people's shadows at the moment of their death in order to free his own shadow. During one of his missions, he encounters a woman he fell in love with during a chance meeting just before his own death years before. When he discovers that she has a boyfriend, he decides to do the unthinkable. Will he be able to redeem himself before it's too late? Or is the price of freedom in this strange netherworld too high a cost?

This is a film best come to knowing as little about its surprises as possible. It's an engagingly inventive work, and a world that I very much wanted to know more about. In its brief 20 minute running time, it drew me in and gave me a taste of what felt like something much larger. This is a story practically begging to be turned into a feature, and I hope it gets enough notice through its Oscar nomination to do just that. It transcends its steampunk roots and achieves something truly original. Visually inspired by the works of Guillermo Del Toro, Terry Gilliam, and Jean-Pierre Jeunet, Death of a Shadow is a fascinating and unique work that ends far too quickly, through no fault of its own. Avermaet is a talent to watch. 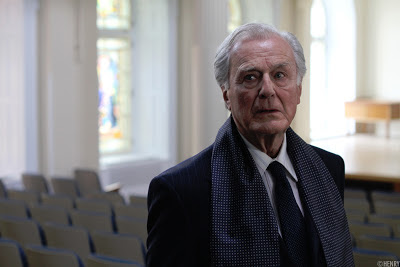 Yan England's touching Henry plays like a companion piece to Michael Haneke's Amour. It could even be seen as a sequel of sorts to the Best Picture nominee, following an old man's fading memories of his wife. Both were musicians - Henry, a pianist, his wife - a violinist. They met during a rain in WWII, playing a duet together just before a German blitz. England unfolds the tale slowly, looking back at their meeting through the  deteriorating lens of Henry's memory. Lost in a fog of old age, Henry sees his existence in a nursing home as an attack by outside forces, and as the years go by, he finds that not only does he not recognize his own family, but he may be losing the only thing he has left of his wife - their memories.

It's a beautiful and heartbreaking tale, a film made in honor of England's grandfather, Maurice, whose moving quote brings the story to a close - "The worst thing about old age is the awareness of being an old man losing his memory." It's clearly a deeply personal film, and it's the most emotionally enriching of the nominees. England made the film without any funding with a cast of professional actors and crew who donated their time to the project. Henry is a wrenching work, and while it may not be quite on the same level as Amour (its paranoid thriller-like opening is a bit disingenuous), it is still a haunting portrait of old age and true love that manages to be deeply moving while dispensing with unnecessary sentimentality. England's evocation of memories slipping through one's fingers makes for truly powerful stuff.