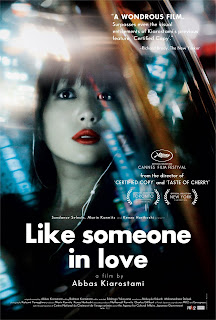 The title of Abbas Kiarostami's Like Someone in Love is key to understanding its nuanced intentions. Not only the title of an Ella Fitzgerald song which Kiarostami uses to haunting, almost ironic effect in the film, Like Someone in Love refers the characters that form the film's heart - who have all the pretenses and assumptions of people who are in love, but none of the feeling or emotion that goes along with it. They are like people in love, but they are not, in fact, in love.

In the Iranian director's last film, the gorgeously enigmatic, Italy-set Certified Copy, truth was obscured behind pretense and language, with a couple whose true relationship remains hidden beneath an artificial facade. In Like Someone in Love, Kiarostami moves to Japan, slowly peeling back the layers of his characters relationships, eschewing back story in favor of slowly developing characterization. It remains very much in the moment, only revealing what we need to know at any given time. This makes for a singularly compelling experience, turning a tale of lost souls who find a unique connection into something mysterious and beautiful.

It begins with Akiko (Rin Takanashi) a young prostitute at a high end brothel. Kiarostami never uses the word "prostitute," however. Nor "whore" or "call girl" or any other names associated with the world's oldest profession. When we first meet her, she is just a girl having a fight with her boyfriend over the phone, an argument that takes place almost entirely off screen. Her boyfriend is suspicious, ordering her to  prove her whereabouts in increasingly ridiculous ways. Akiko's grandmother is visiting Tokyo for the first time, but she has been ordered out to a very special client. There is a sequence early on in the film where Akiko listens to a series of unreturned voicemails from her grandmother who is alone in Tokyo hoping to meet up with her granddaughter that is one of the most heartbreaking scenes in recent memory. Kiarostami stages it brilliantly, one voicemail after another, no music or other cues to how the audience should feel, just stark, slowly building emotion. It's a beautiful sequence, that perfectly sums up the quiet power of Like Someone in Love.

The client Akiko is sent to meet is an elderly retired professor named Takashi (Tadashi Okuno), who welcomes Akiko into his home with music and food. Something is amiss here, however. While the two discuss art and Akiko struggles to stay awake, offering her body in an increasingly awkward way, it appears as if Takashi isn't interested in Akiko for the reasons she anticaptes. The two form a strange and unusual bond, Takashi almost becoming another grandfather to her as she tries to navigate a difficult life. But when her jealous, possessive boyfriend becomes involved, the trio move inexorably toward a dramatic conclusion born out of the struggles of Akiko's chosen lifestyle. His brand of love for Akiko isn't love, but rather a desire to marry out of desire to control - once they are married, he reasons, she will have no choice but to obey him. Over the course of 24 hours, all three of their lives will change forever.

Like Someone in Love is not a film of answers, it is a film of questions. Kiarostami never really reveals the motivations behind his characters actions, what matters here are the consequences of those actions. Identity is irrevocably bound to perception, and no one is who they seem to be on the outside. We only know as much about the characters as they know about each other. This is further reinforced by Kiarostami's peculiar mise-en-scene, which often keeps the subject and the main action just out of frame. It's almost a type of formal naturalism, very specific in its style and what it does not reveal, but strangely true to life in that we often miss that which is most important. I think it's more symbolic, though, of the character's motivations always staying just out of reach. Truth skirts around the edges of the film, fleeting, teasing, like the promise of something greater always eluding Akiko's grasp.

It's an exhilarating experience, discovering these characters as they discover each other, and more importantly, themselves. It is a film about discovery that is not about the discoveries themselves, but the process by which the discoveries are made. Kiarostami weaves the lives of these three disparate people together with an expert hand, creating something both recognizable and unknowable. It is a brilliant examination of relationship dynamics and unspoken perceptions that may not provide us, and by proxy, the characters, with the answers we seek, but then again neither does life.  Like Someone in Love  is a beautiful mystery, a haunting enigma whose pleasures slowly unfold under a master's expert eye. This is essential cinema, the kind of stirring, intelligent filmmaking that restores one's faith in movies.