No film in 2009 has grown on me in retrospect quite like Pedro Almodovar's Broken Embraces (Sony Pictures Classics, 11/20). Watching an Almodovar film is always a bit like wrapping yourself up in a cinematic warm blanket, even his more disturbing films like Bad Education has that certain warmth one associates with watching a master at work. 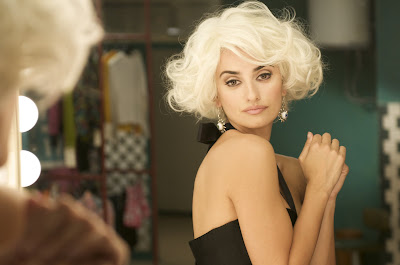 
Broken Embraces has seen more mixed critical reactions than most of his recent output, and indeed on first glance it is a much more subdued effort on his part. But what struck me the most about this film and is relation to cinema in general (it is ultimately a film about the power of editing and the director's relationship to his work), is how much better it is as using cinema of the past as a reference point than, say, Tarantino's much balleyhooed Inglourious Basterds. The reason being, Almodovar does not use it as a crutch, rather as a subtle reference point to reinforce the film's themes and their cinematic significance. Whereas in Inglourious Basterds, that seems to be the whole reason for its existence.

In all honesty, I think I was more impressed by Broken Embraces than Almodovar's last effort, Volver. It reminded me in some ways of his 1997 film, Live Flesh, one of my personal favorites of his films, in its dark, noir-ish take on love and vengeance. 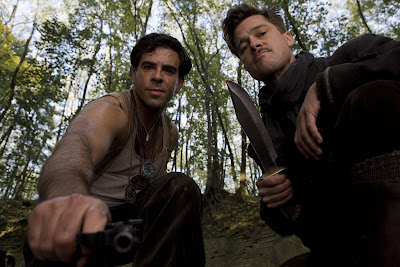 Almodovar and Tarantino both clearly have a deep love of cinema and a keen understanding of its inner workings and its history, but Tarantino's back-referencing tends to be more blunt force, especially in comparison's to Almodovar's more scalpel-like subtlety. It's almost funny to call the often garish colors and transsexual debauchery of Almodovar's films subtle, but the emotions at work in them always sneak up on you when you least expect it. That is the mark of a true master, who pays homage to the masters before him, while giving plenty of new material for the masters who will come after.

Sam C. Mac said…
The problem with "Broken Embraces" is that there's no characters in the film. They aren't developed, we don't have a sense of them by the end, and so the big reveal - at least for me - didn't pack the punch his other films' similar 'big moments' have tended to.

It's as accomplished technically as any Almodovar film, and like the last 8 or so, does reference his back catalogue and act as something of a career summation. But the feeling's all wrong this time. The craft is impeccable, but the themes are familiar, and nearly all of them have been explored more effectively in other Almodovar - in most cases, "Bad Education" or "Law of Desire."

What makes it a lesser work is the passion this time around is lacking in a major way. It's the only film of his I've seen that actually feels tedious. At least "Volver" is vibrant and energetic while this film mostly plods and is sort of awkwardly muted. It feels like a purposefully mature work that just ends up being less interesting.
4:49 AM