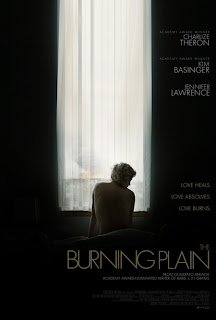 For those who have seen screenwriter Guillermo Arriaga's collaborations with director Alejandro González Iñárritu, Amores Perros, 21 Grams, and Babel, it shouldn't be too hard to anticipate what awaits them in his directorial debut, The Burning Plain.

Following 3 different women across two different time periods, The Burning Plain is yet another one of those interlocking storyline films that have become so prominent in independent filmmaking after Steven Soderbergh's Traffic scored big at the Academy Awards in 2000.

The bulk of the film belongs to Charlize Theron, who plays long suffering waitress, Sylvia; who, while good at her job, finds her life empty, and fills it by having random hookups with complete strangers, trying to purge herself of guilt connected with a traumatic event in her past.

Kim Basinger is Gina, a struggling, emotionally fragile working class mother who is secretly having an affair with a local Mexican worker, Nick (Joaquim de Almeida). The two meet in an old abandoned trailer in the middle of the New Mexico plains, making love on the dusty old bed and leaving the troubles of their every day lives behind. 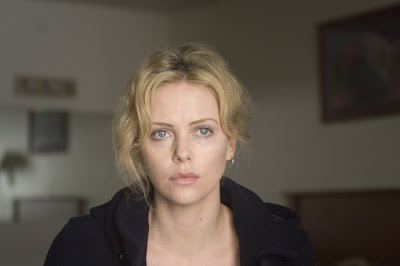 Charlize Theron in THE BURNING PLAIN, a Magnolia Pictures release. Photo courtesy of Magnolia Pictures.
It soon seems as if the two have fallen in love, carving out a little haven for themselves to live out an alternate life. But when Gina's teenage daughter, Mariana (Jennifer Lawrence), discovers them, she feels as if her family is falling apart. Worried that Gina and Nick will run away together, Mariana becomes determined to put an end to the affair and find a way to keep her family together in any way she can.

The stories of Sylvia, Gina, and Mariana, slowly converge, and eventually the connection is revealed. But anyone who has been paying any attention should figure it out right away, because what The Burning Plain treats like a great revelation is actually a blatant no-brainer. It's an anti-climactic twist, one so obvious I hesitate to even call it a twist. But the filmmakers obviously think it is, so we'll go with that.

As a whole, The Burning Plain is a perfectly respectable, middle-brow drama with obvious Oscar aspirations. It's also almost instantly forgettable. It rolls along, neither offending with its presence or causing any great excitement, and immediately fades upon leaving the theater, leaving no real lasting impact. 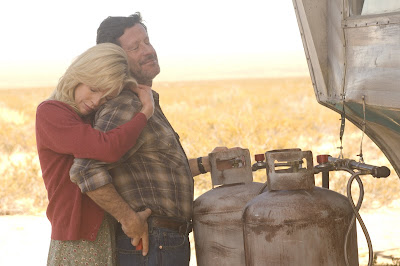 Kim Basinger and Joaquim de Almeida in THE BURNING PLAIN, a Magnolia Pictures release. Photo courtesy of Magnolia Pictures.
Theron and Basinger both deliver fine performances, but everything about the film just seems tired. We've seen it all, done much better, before. There is nothing here worth recommending over other, similar films. It feels like a bland mix, a piece of white bread amidst spicier, more exotic loaves. Structurally, it's very old hat, and this time its cross-cutting between stories doesn't enhance the story, it hinders it. The structure relies upon the third act twist that is so essential to the emotional arc of one of the characters, but since any thinking audience member should already know what it's revealing by that point, we're already 3 steps ahead of Arriaga, making the film feel plodding and redundant.

While one can't knock the solid, basic craft, The Burning Plain is, as a whole, competently assembled, the whole project feels underwhelming. It is both uninspired and langorous, a bland and anonymous concoction, while mildly engaging at the time, leaves no satisfying aftertaste.