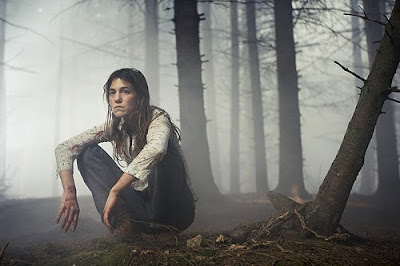 Von Trier can’t seem to keep from confusing the mythic power of the oppressed Female and the history of repressive violence done to women. The two kinds of violence arbitrarily cross paths. Thus Dafoe mutates from symbolizing masculine oppressiveness to being the castrated victim—a proto-woman himself. And this gets mashed up with horror movie conventions. He eventually morphs into the “final girl” who generically survives the knives of movie serial killers like Jason in various horror franchises. And the clitorectomy Gainsbourg performs on herself only dimly makes sense if she has also undergone a spiritual sex change, actively assuming the persona of vindictive masculine oppressor.

Gross has a lot to say about Antichrist, and while some may be construed as reading too much into something Von Trier really didn't think that much about, I think he's pretty spot on about the film. It's a fascinating reading of the movie, especially the Gainsbourg as masculine oppressor angle, which makes sense.

This is exactly the kind of discussion I hoped would spring from Antichrist. It is obviously a deeply flawed work, but also the work of a deeply troubled artist struggling to pull himself out of a deep depression. Great art springs from great turmoil, Von Trier's work here is staggering. It demands to be mulled over and contemplated. Whether one ends up reacting positively or negatively to it is ultimately beside the point. The point is that Antichrist is a work of mad, staggering genius, even if it is a genius in decline, working as unenthusiastically as possible, churning out what is inevitably going to be a hotly debated and divisive work.

The plus side is that the discussion that springs from it will almost certainly be better than the film itself. But flawed or not, what we are dealing with here is a work of jaw-dropping power and vision. And for that it more than deserves critical consideration.

Anonymous said…
Matthew--Thank you for linking to this article.