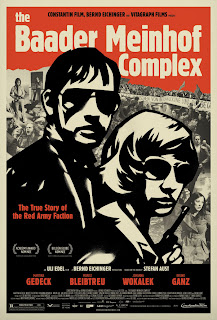 The roots and causes of terrorism have been long debated and discussed by politicians, historians, journalists, and commentators for years, most heatedly in America since the events of September 11, 2001. It should come as no surprise, then, that it has also been explored, to great success, by artists and filmmakers as well, giving rise to such films as Paradise Now (Hany Abu-Assad, 2005) and Munich (Steven Spielberg, 2005).

While Paradise Now dealt more with the personal motivations of suicide bombers, and Munich the vicious circle that propagates terrorism, Uli Edel's The Baader Meinhof Complex (which was nominated for Best Foreign Language Film at last year's Academy Awards) examines the societal conditions that radicalize citizens into taking violent action against the government.

The focus here is Germany's Red Army Faction, made up of children of the Nazi generation who in the 1970s rebelled against the government they saw as becoming a police state, and took action to insure that fascism never gained a foothold in their country again. 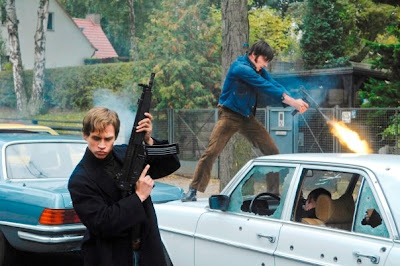 The RAF was largely born out of student unrest, as protests against the Vietnam war became increasingly violent. In response, the German government stepped up police actions against the protesters, causing violent clashes between students and police. In response students became more and more radicalize and organized, resulting in the creation of the RAF, a leftist terrorist organization whose goal was to fight fascism and protect the third world from oppression. It was led by the fiery Andreas Baader (Moritz Bleibtreu), his lover,Gudrun Ensslin (Johanna Wokalek), and journalist Ulrike Meinhof (Martina Gedeck), who left her family and her job to fight for what she felt was right.

Always focusing their efforts on government or police targets instead of civilians, the RAF appealed to the people to support their cause, and the people responded with almost overwhelming support, leaving the government in a sticky situation. But as time wore on and members of the gang were captured, the new members who rose to take their place began to take the group into new, increasingly radical, territory. As the movement spirals out of hand in an increasingly globalized (and dangerous) effort, not even the original founders recognize what it has become. 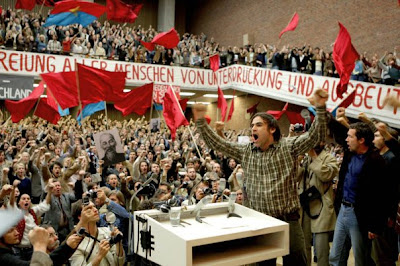 The Baader Meinhof Complex has been accused, in certain circles, of being pro-terrorism. But to hold that view is to miss the point of the film completely. This is not a film that condones the actions of its protagonists (although, admittedly, they are shown in a sympathetic light), rather it is one that examines what made them who they are, and in many ways, where the Islamic terrorists we know today came from. These were students, journalists, every day people who became radicalized by a wide set of circumstances - who eventually lost sight of their goals and their original identity, changed by their ever shifting ranks and the idealism of youth. The film, more so than any other in recent memory, actually has the nerve to ask "why?" rather than point fingers or paint in broad strokes.

Structurally, The Baader Meinhof Complex is taut and ferocious, a lean, solid, unsentimental narrative that dives right into the nitty gritty details of its subject. It's not always a pleasant film, nor is it meant to be. It is, in many ways, Munich by way of Hunger multiplied by The Hurt Locker. It uses skilled editing and all-around strong performances to convey the sense of desperation and urgency of the RAF, with Edel's stark and efficient direction holding it all together. It is a clear eyed account of the roots of modern terrorism that confronts the viewer with profound and unsettling moral questions, making it a film whose effects will be very hard to shake.

Luke said…
This was one of the best films I've seen in the last couple years. It sticks with you long after the film finishes. Excellent portrayal of a complicated issue. I would highly recommend seeing it in theaters, because it's a really great experience. This site stays up to date on openings: http://www.baadermeinhofmovie.com/theatres/theatres.html
2:35 PM

Daniel said…
Like your thoughts on this a lot, and I don't know why people would consider it pro-terrorism. I saw it at as indictment of their methods, proof that they failed at their campaign, at least in the way they originally planned.

The one thing I would say is that I felt this ran about a half hour too long.
2:19 PM

Unknown said…
The Badder Meinhof is absolutely pivotal and intense, in a good way! Action packed drama and unconventional battles of terrorism and radicalism liberates what ever soft or romantic ideas one might have had about the film before it was watched!This well written historical perspective exemplified a moment in time where things where politically driven and terrifying . Badder never has a dull moment and is sure to keep the audience captivated attention , its a must see!
1:40 PM