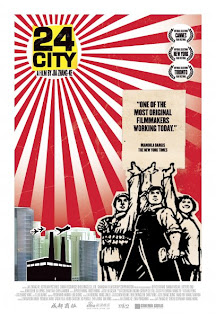 No other filmmaker has quite captured the evolution of modern China as well as Jia Zhang Ke. His films represent a kind of Chinese family album, preserving memories of what once was as progress marches forward. His last film, Still Life, which chronicled lives that were displaced by the damming of the Yangtze river by the massive Three Gorges Dam, made it on to my 2008 top ten list for its haunting portrayal of needless modernization at the expense of history.

The subject of 24 City is the Chengdu Engine Group in Chengdu City, more commonly known by its military designation as Factory 420. Built in 1958 as part of Chairman Mao's plan to move all munitions factories into safer inland areas barring an enemy invasion, Factory 420 enjoyed years of prosperity producing airplane engines before being sold to a large, privately owned real estate developer, who plans to raze the factory and replace it with a large apartment complex called 24 City. 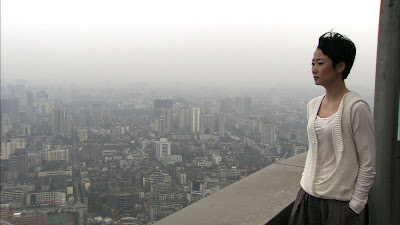 Zhao Tao as seen in Jia Zhang-ke’s “24 City.” Courtesy of The Cinema Guild.
Jia crafts his film as a part documentary, part fictional look at the people who made Factory 420 run. Seamlessly mixing real life interviews with fictional monologues, 24 City paints a deeply personal portrait of a generation upon whose backs Factory 420 was built. We hear tales both tragic and heartwarming, as former workers recount profound learning experiences at the hands of their old masters, or in the heartbreaking case of one woman, how she lost her child in a crowd while on the way to the factory, but was forced to leave before he could be found by a cruel deadline.

Yet, despite it all, the workers of Factory 420 seem strangely nostalgic about the place they once called home. Being forced to leave a place that has become the center of their lives into a job market that no longer has a place for their skills is a tragedy in and of itself. The face of China is changing drastically, and for a private company to come in and buy out a state owned operation is a huge deal. The ideals of Communism, that the worker should be put first, are being bulldozed out of the way by the ever encroaching specter of Capitalism. 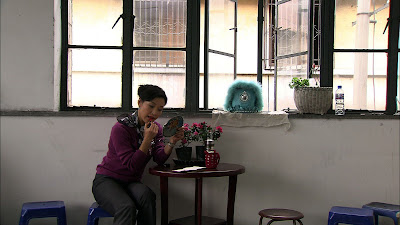 Joan Chen as seen in Jia Zhang-ke’s “24 City.” Courtesy of The Cinema Guild.
To its credit, however, 24 City is not some one sided, anti-Capitalist hit piece. What makes it so surprisingly multi-dimensional is when, near the end, it begins interviewing the children of the workers. All grown now, this new generation has a much different view of Factory 420 than the wistful reverence of their parents. They describe weeping openly at the sight of their parents reduced to the menial labor of the factory, and of a determination to do well by them and buy them an apartment in the new 24 City. It is a stark contrast to the elders' "work hard and glorify China" attitude, another sign of the changing of the times and the ever widening generation gap.

But which one is right? Or could it be both? Jia allows them both to speak, the old and the new, but one can't help but feel a kind of aching sadness, especially in the eyes of the workers, for the soul of how things used to be, that maybe progress, in this case, is a double edged sword. Has the China of today sold its soul to compete in an increasingly fast paced world? It is a fascinating and bittersweet film, its structure creating a wholly original and moving viewing experience that takes the plight of people half a world away, and makes it stunningly, hauntingly, our own.