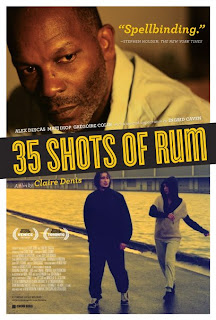 Claire Denis' sublime 35 Shots of Rum goes for nearly seven minutes before anyone says a word. And what an enchanting seven minutes it is. Denis begins her tale of a widowed metro conductor and his unconventional family with a lyrical montage of the Parisian metro system, its rough, mechanical landscape creating its own kind of poetry in motion - a symphony of the rails.

It is at once beautiful and mesmerizing, completely enveloping the viewer into the world of the film, both joyous and melancholy, vibrant and mundane. It is a world instantly recognizable in its simple realism - the tale of a father, Lionel (a hauntingly world weary Alex Descas), whose daughter, Joséphine (Mati Diop), has become a sort of surrogate wife to him after his wife's passing. Having lived together for many years, each has settled into their own routine. But gradually, Joséphine has begun spending more time with their neighbor, Noé (Grégoire Colin), while Lionel is having a tentative romance of his own, with an old friend and cab driver, Gabrielle (the regally beautiful Nicole Dogue). 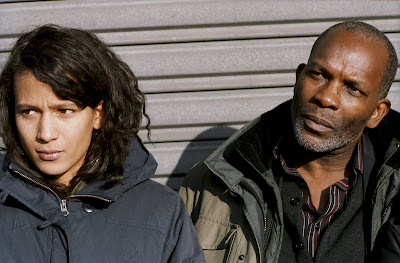 Josephine (Mati Diop) and Lionel (Alex Descas) as seen in Claire Denis’ “35 Shots of Rum.” Courtesy of The Cinema Guild.
35 Shots of Rum follows their lives through its routines and hiccups, be it at the retirement party of an old friend, behind the controls of a metro train, having their car break down on the way to a concert, or simply sitting in the kitchen enjoying a meal together. Denis is always keenly in tune with the nuances and rhythms of every day life, and she makes even the most ordinary moments seem extraordinarily beautiful. Her continual return to the music of the metro rails only reinforces its subtle beauty, and when accompanied by Tindersticks' mournfully jazzy score, it becomes something of simple yet transcendent grandeur.

But the real beauty, and indeed the real power of 35 Shots of Rum, comes in what the characters do not say. These characters say more with just a glance or a gesture than pages of dialogue ever could. Denis uses these moments to allow the audience to fill in the blanks, while the words left unsaid reverberate through the silence. To quote Tarantino's Pulp Fiction - "That's when you know you've found somebody special. When you can just shut the fuck up for a minute and comfortably enjoy the silence." The same applies to films as well. That is the mark of a consummate filmmaker and storyteller - the ability to tell a story without words. 35 Shots of Rum could have easily been a silent film, using only images and music. But the dialogue that is used is so finely tuned and naturalistic that it makes the film that much more immediate. 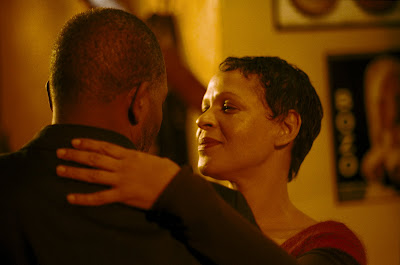 Lionel (Alex Descas) dances with Gabrielle (Nicole Dogué) as seen in Claire Denis’ “35 Shots of Rum.” Courtesy of The Cinema Guild.
Denis obviously knows her characters, and she makes sure the audience does too. The world of the film feels wholly worn and lived in, like a pair of Lionel's old slippers he always changes into when he gets home from work. It's all so loose, so free, so sexy, that it's almost hard to imagine that these characters are not, in fact, real. It is a fully realized and immediately accessable world, that is oddly perfect and expertly crafted by Denis. Everything about it just feels so right, so completely compelling and engrossing that it sets its hooks in the viewer early and never lets go. By the time the film ended I was saddened not so much by the path the characters take (which is a path of moving on that we all end up facing), but by the fact that I had to leave the world of the film.

We empathize with these characters. They are our friends, our family, our neighbors, they are us. 35 Shots of Rum isn't so much a film as it is a mirror, one that invites us to look inside and find ourselves, drawing us into its own tremulous, careworn beauty. It is a world to which I immediately longed to return, and I hope the same can be said for all who choose to take its beguiling journey.