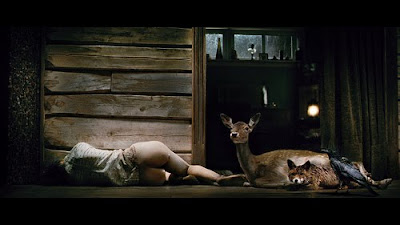 From The Chicago Sun-Times:

I cannot dismiss this film. It is a real film. It will remain in my mind. Von Trier has reached me and shaken me. It is up to me to decide what that means. I think the film has something to do with religious feeling. It is obvious to anyone who saw "Breaking the Waves" that von Trier's sense of spirituality is intense, and that he can envision the supernatural as literally present in the world. His reference is Catholicism. Raised by a communist mother and a socialist father in a restrictive environment, he was told as an adult that his father was not his natural parent, and renounced that man's Judaism to convert, at the age of 30, to the Catholic church. It was at about the same age that von Trier founded the Dogma movement, with its monkish asceticism.

Again, Ebert demonstrates why he is the man. He clearly "gets" Antichrist. One of the great critical sins is to dismiss it altogether, as so many have. You can't dismiss it, because it won't let you. As Ebert writes:

I rarely find a serious film by a major director to be this disturbing. Its images are a fork in the eye. Its cruelty is unrelenting. Its despair is profound. Von Trier has a way of affecting his viewers like that. After his "Breaking the Waves" premiered at Cannes in 1996, Georgia Brown of the Village Voice fled to the rest room in emotional turmoil and Janet Maslin of the New York Times followed to comfort her. After this one, Richard and Mary Corliss blogged at Time.com that "Antichrist" presented the spectacle of a director going mad.

There is some truth in that - Antichrist is something of a work of mad genius. But as Seneca said - "There is no great genius without some touch of madness." Ebert's piece is a clear-eyed piece of criticism, something that has been sorely lacking when it comes to Antichrist and Von Trier in general.
Email Post